How to use SNMP to monitor your VoIP network 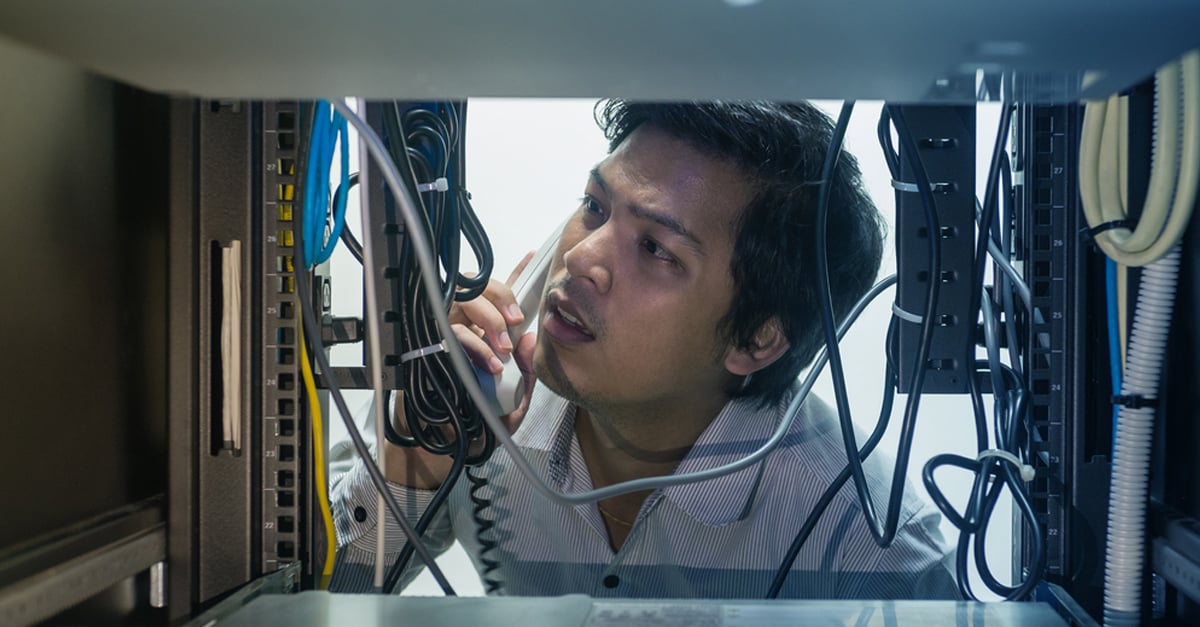 Wouldn’t it be great to have superhero X-ray vision that allows you to understand, in a single glance, what is going on with the voice traffic on your network? In fact, it is possible to do so using the Simple Network Management Protocol (SNMP). In this article, we take a look at this protocol and highlight the special features it has up its sleeve to help you with your VoIP monitoring needs.

SNMP is very useful for voice applications because it can monitor aspects of the network beyond just the voice devices. It provides a complete picture of the network, along with all of the elements that can affect voice. SNMP can collect valuable information about a network and its devices, then consolidate and present it in a concise and actionable format. Some of the most important aspects of a voice network that can be monitored using SNMP include:

An SNMP manager can be custom configured to present the most relevant information for your particular applications. The following image shows an example of an SNMP monitor displaying measurements on a configurable dashboard. 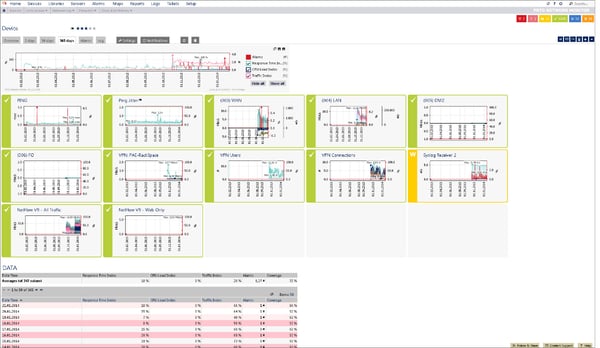 SNMP is all around you

SNMP is a protocol that is used to collect and organize information about devices on an IP network, and to modify that information to change device behavior. This means that the protocol can be used to both monitor and remotely adjust the configuration of network devices. As an integral component of the internet protocol suite, it is a mature, reliable, and secure protocol.

👉 SNMP is not a piece of software that provides monitoring, but rather is the communications protocol that is leveraged by both software and hardware to enable detailed network monitoring.

SNMP is supported by countless devices, including routers, switches, firewalls, wireless access points, printers, IP cameras, IP phones, and servers and workstations running most Linux, Windows, and MAC operating systems. Even the majority of low-end customer-grade ADSL and cable modems support it. Because of its virtual ubiquity, SNMP’s potential is commonly overlooked and underused.

The value to voice engineers

Since it is supported by almost all networking and networked devices, no complex configurations are necessary. It can easily be enabled on all devices that you wish to monitor, and with a simple configuration, all captured information can be directed to an SNMP monitoring server where it is collected, processed, interpreted, and presented to an administrator.

There are innumerable variables that SNMP can monitor. These include elements such as the more conventional bandwidth, QoS, jitter and uptime, to the more detailed and obscure system temperature, connected users (for network services of all types), and even GPS coordinates. The actual monitored elements available depend on each device.

SNMP is not only a monitoring tool, but also a network device management tool. As mentioned before, it can modify the configuration of any SNMP-enabled device. The focus of this article, however, is its monitoring capabilities.

Managed device – This is the device that you wish to monitor. It can be virtually any network-connected device.

Manager – The machine, usually a server, which collects SNMP information from multiple managed devices. The manager is also responsible for interpreting and displaying information about the network, as well as notifying administrators of particular events. Some notable SNMP monitoring software packages include SolarWinds Network Performance Monitor, Nagios, and Spiceworks Network Monitor, to name a few.

Agent – This is SNMP-aware software that runs on a managed device. This software is often inherent in the firmware or operating system of the managed device and is responsible for responding to and sending out SNMP messages.

Master agent – Some managed devices may have multiple agents running on them. A master agent consolidates all the local agents into a single process that communicates with the manager.

Trap – An SNMP trap is simply an alert message sent from the agent of a managed device to the manager. It contains information about events that occur.

GET/SET requests – These are messages sent from the manager to the agent to either get information (traps) about the state of a particular component of the managed device, or to set particular configuration parameters on that device.

GET/SET response – These are messages sent from the agent to the manager as replies to the GET/SET requests.

Management information base (MIB) – This is the heart of SNMP. Without going into technical detail, the MIB is a hierarchical arrangement of variables that reside on each managed device. These variables represent specific monitoring information about the device. When a trap is sent, it is accompanied by a reference to a variable in the MIB, indicating what information is being provided. The same is true when GET/SET requests and responses are sent.

The following image shows the interaction of these components in a typical SNMP scenario. 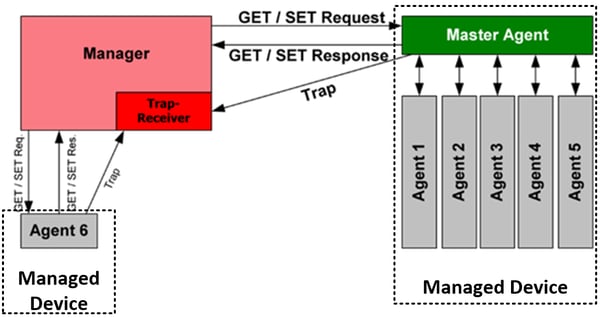 An SNMP manager must be installed on the network where the managed devices reside. Typically, this is installed on a Linux or Windows server located within the datacenter of the enterprise network. SNMP must then be enabled on each managed device that will be monitored.

Managed devices must be configured to send traps to the manager. These are known as unsolicited traps. The sending of traps can be configured so that they are sent when a certain threshold is reached, or can be sent periodically. For example, an SNMP trap for the bandwidth on a particular port of a switch can be configured such that updates are sent periodically every 30 seconds, or are sent only when at least 80% of the bandwidth is in use. The first situation can be used if you desire to have a historical record of traffic on the port over a long period of time. The second situation can be utilized if you only want to be notified when bandwidth usage is reaching saturation levels.

The manager can also be configured to request information from the agents running on the managed devices using GET requests.

SNMP version 1 (SNMPv1) is the initial implementation of the protocol that was published in 1988. Since then SNMPv2 and SNMPv3 have been published, the latter of which is the current standard version. Whenever possible, it is advisable to employ SNMPv3, since it has the highest security standards of the three versions. This, of course, depends on the version that is supported by the managed devices in use. It is possible to run multiple versions of SNMP on a network, as long as the manager is capable of supporting them.

SNMP is such a versatile protocol that it can monitor almost anything. This of course means that, although relatively simple to implement, some level of more involved configuration and parameterization is necessary to customize a solution to suit your needs. It may take time, and some level of financial investment, to obtain the setup you require, but it is well worth both the time and the money. Being able to look at your network, as if through X-ray vision, and to identify potential risks to the quality of your voice services will go a long way towards guaranteeing the peace of mind and the level of control you require as a voice engineer.

VoIP protocols: H.323 and MGCP as alternatives to SIP