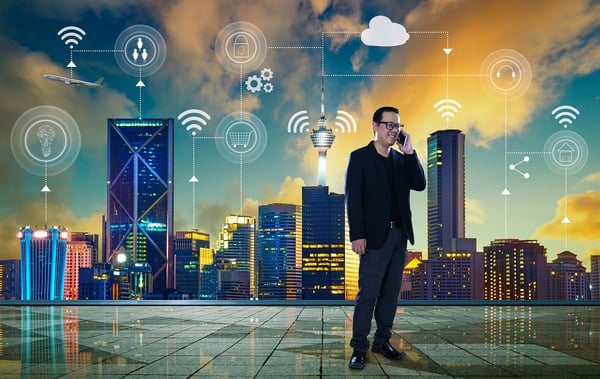 IoT can be defined as the inter-networking of physical devices, buildings, and other objects with electronics, software, sensors, and actuators. The resulting connectivity of these objects enables them to collect, exchange and send data, and to act upon this collected data. These objects can be stand-alone devices specifically designed for IoT, such as smart sensors (e.g. temperature, light, humidity, motion, CO2, or wind sensors), smart imaging and audio devices (e.g. video camera, microphone, still image camera), smart actuators (devices that move things such as an electric motor or a hydraulic piston), or can be equipment and appliances that have been around for years but have been made “smart” by the addition of electronics, software and network connectivity. Such devices could include a car, a washing machine, a traffic light, or a home alarm system.

The connectivity of these devices allows them to be controlled remotely, either individually or en masse, by a human being, or, more commonly, by a centralized control system or even directly by other connected devices. Additionally, these smart devices can send information such as temperature, status, video, sound, text, images, statistics, or just about any kind of quantifiable and digitizable data to a data repository for later processing and analysis, or to a dashboard to be viewed in real time.

Some common examples of IoT in action include:

The benefits that can be enjoyed by the correct and appropriate application of IoT systems are for the most part indisputable. Nevertheless, as with most applications of ICT, the issue of network security must be addressed.

There are several characteristics of IoT that make it inherently susceptible to the attack of malicious hackers. These include:

Although it is true that IoT presents some security risks due to its nature, its greatest vulnerability lies in a completely different domain.  This vulnerability is due to two basic deficiencies.

The first has to do with the lack of mature and comprehensive security standards and best practices for IoT, like those already developed for more established networking technologies such as VoIP, VPNs, or web and mobile applications. It is natural for a new technology to go through the maturing process of developing such standards. The rapid pace of implementation of IoT, however, is outstripping the rate of maturation of these standards and best practices, often leaving vulnerabilities of IoT unchecked.

The second involves the readiness of companies and even their willingness to employ the appropriate security precautions to sufficiently secure their systems. According to an AT&T Cybersecurity Insights report,  85% of enterprises surveyed are in the process of, or intend to deploy, IoT devices, but only 10% of them feel confident that they could secure those devices against malicious hackers.

Even though security precautions and best practices have not yet matured enough to promulgate a well-established security standard for IoT, networking principles in general do provide adequate guidelines for appropriately configuring and deploying secure IoT networks. Companies planning to invest in IoT must invest in the security of the IoT devices themselves, of the network serving them, and of the IoT applications that run on the devices, as well as of their centralized management systems.

When applying security to any network, whether it includes IoT devices or not, the fundamental principles and best practices of network security should always apply.

Secure the wireless network – As mentioned before, IoT infrastructure most often leverages wireless network technologies. Unfortunately, data networks are often compromised by poorly configured security parameters. Although difficult to secure correctly, there are best practices that adequately secure Wi-Fi for any purpose, including IoT. By using the strong encryption provided by WPA2, adequately complex passwords, appropriately segregated subnets, and MAC address filtering for IoT devices, a strong level of security can be achieved.

Unified threat management appliance – For threats that originate both outside and inside your network, a UTM appliance offers a more complete and integrated solution for network security. These types of solutions are more often employed by larger corporations on their enterprise networks. Such an appliance combines multiple security features, including firewall functionality, intrusion detection and intrusion prevention, all of which protect against malicious users both inside and outside the network. This is ideal for a network employing IoT technology, since the UTM appliance can be programmed to respond automatically to preconfigured threat thresholds.

Ensure the reliability of the IoT devices themselves – IoT device manufacturers, like those of all types of technology, develop  a reputation that is based on the past experiences of users and developers. Beyond consulting with your TeleDynamics rep, online forums are a good place to obtain objective and reliable information about the level of security offered by specific IoT devices directly from people who have had first-hand experience with them.

Secure the data – Having secured the network infrastructure and making sure the IoT devices themselves are protected and reliable, the next important item of security is the data that are captured. One of the main functions of IoT devices is gathering data. Environmental input, images, mobile phone signals, and citizen and user behavior statistics are just some of the categories of data that are typically collected using IoT. These massive amounts of data, especially those accumulated over large periods of time, are valuable and irreplaceable. Data sets may also include personal and private information that should not be proliferated in any way.

For this reason, they must be secured not only from malicious hackers, but also from human error, physical security threats, and even natural disasters. Security polices protecting such data should include off-site backups, user training, appropriate audit trails and other forensic security capabilities.

IoT is quickly outstripping all other forms of data accumulation and will account for the majority of internet traffic worldwide in the coming years. This makes it imperative to employ the appropriate levels of security to protect IoT devices, the network infrastructures they are connected to, and the data they accumulate.