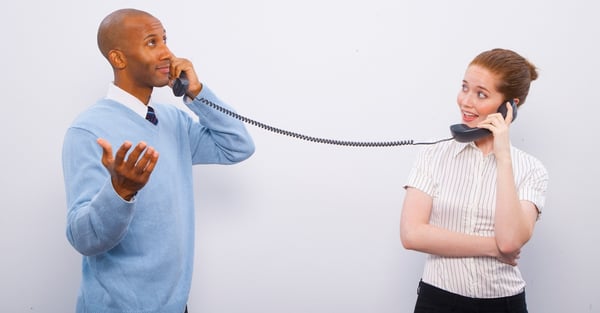 In this article we offer up some tips for streamlining the implementation of a multisite VoIP deployment so the company can derive the maximum benefit from the solution.

VoIP to the rescue

Using VoIP technologies, we can interconnect corporate and branch offices via a private network so that all communication between sites is routed over a WAN, rather than the PSTN. Enterprises typically already have WAN deployments for their data networks; it’s just a matter of leveraging them for VoIP.

The below diagram is an example of one of many possible multisite VoIP deployments for a multinational corporation. 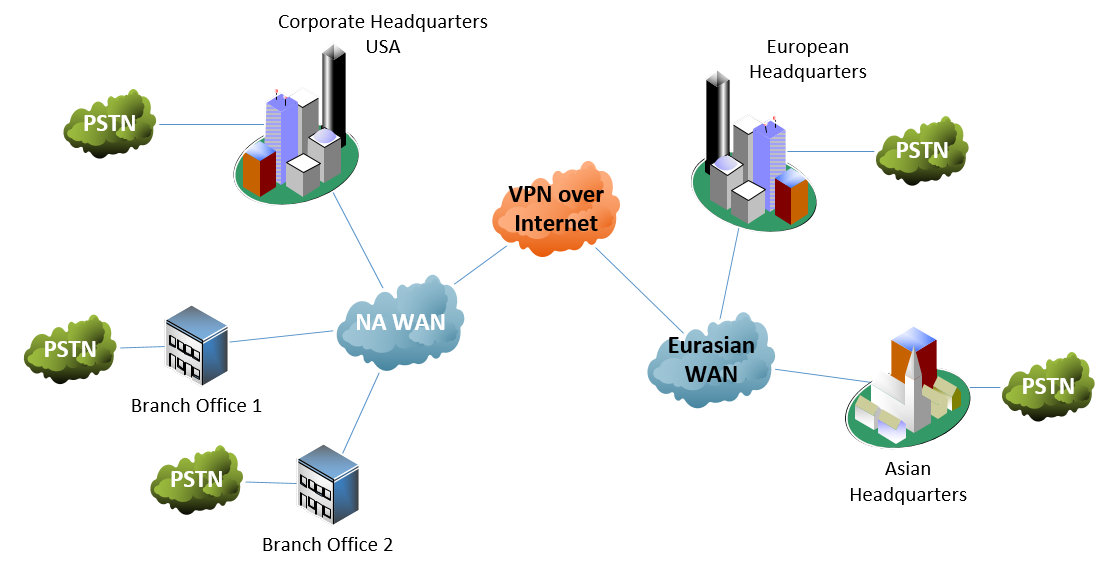 When implementing a multisite VoIP system, there are some issues that are generally not a concern for single-site deployments. These include:

These must be dealt with in an appropriate manner in order to leverage the multisite VoIP environment as optimally as possible, and are described in further detail below.

The dialing plan is important because it must provide a unique directory number to each internal user. While this is usually not an issue in a single-site deployment, it can be a concern when multiple sites are involved. Telephony administrators typically have to deal with an overlapping dial plan when longstanding independent installations that each have their own dialing plan are being interconnected for short-code internal dialing. This is common with company takeovers when new sites are added to the network.

Internal extensions – One method of implementing a dial plan is to have a single number for incoming calls for the whole enterprise. Anyone who calls this number will be prompted by an auto attendant to input the extension number of the intended destination of the call. In such an implementation, the called number from the PSTN has no correlation with the extension number. For calls that occur internally, there are very few restrictions on the extension numbers that can be used.

Hybrid system – There are some situations where you would prefer to have some DID numbers for some users and independent internal extensions for others. This is also an acceptable, albeit more complex, solution.

Limitations due to special codes and prefixes – Codes such as dialing 9 to obtain an outside line or dialing 0 to connect with the receptionist are also an issue. The use of such codes eliminates the use of whole blocks of extension numbers starting with 9 or 0. For DID implementations, this could conflict with three-digit extensions that may result from a PSTN number of the form 480-555-19XX.

Implementing the dial plan in a multisite environment

The easiest dial plan to implement for a multisite environment is that of the internal extensions. Because these numbers are independent of any external PSTN numbers, they can be adjusted, changed, mixed and matched to your heart’s content. For example, if you have three sites, you can set your internal extensions so that all 3XX numbers belong to site one, 4XX to site two and 5XX to site three. This makes your plan more intuitive for the end users.

There are downsides to this solution, however. The first is that with internal extension numbers, the caller ID that external parties see when an employee is making an outbound call through the PSTN is that of the central number and does not include the extension number information, so the called party doesn’t know the identity of the caller. Secondly, some corporations do not like to have an auto attendant asking for an additional extension number, and would prefer the DID solution.

The DID solution, although cleaner, is more difficult to implement in a multisite environment. Remote sites, especially those in different area codes, will likely have DID numbers whose final three, four or five digits overlap.

Let’s say at one site, you have DID numbers of the form 480-555-25XX and in another site you have DID numbers of 416-555-75XX. You want to interconnect these sites with three-digit dialing. However, since both sites have the internal extension ranges of 5XX, some of the extensions used at one site could be identical to extensions at the other site, making a dialing plan with unique numbers impossible to deploy. The following diagram depicts this predicament.

For such cases, you can use one of two workarounds.

Keep in mind that by adding site prefixes, additional numbering constraints are being applied, because internal extension numbers at each site cannot begin with the same digit as any configured prefixes. In this example, with the implementation of the 8 prefix, no internal extension numbers in the form of 8XX can be used. If you require multiple site prefixes, two-digit prefixes are also an option. As you can see, although this is a viable solution, it is not a very scalable one.

The second solution involves the use of longer short codes. Instead of using a three-digit dialing system, use a four-digit system that will make each internal number unique. If this is not possible because the fourth-to-last digit is the same at both sites, then even a five-digit system is preferable if it makes the dialing plan simpler and more intuitive.

Tips for multisite and hybrid solutions

When multiple sites are involved in different area codes or countries, the normalization of a dialing plan among these sites can quickly become unmanageable. While it is much easier to implement this setup from scratch, the reality is that most multisite deployments are a result of interconnecting existing networks. Here are a few suggestions for streamlining the process.

So far, all of this has to do with the practical and technical side of things. The human element also needs considering. Employees can become attached to their extension numbers and may resist having them changed. More importantly, some numbers are made known to third parties such as customers and partners, so changing them can cause some havoc. For some implementations, the human factor may be the most difficult part of the dial plan normalization process. For this reason, it is a good idea to have the administration deal with the human factor as much as possible while you deal with the technical issues that you have been hired to perform.

Tail End Hop Off or TEHO is a technique where long-distance and international toll charges can be avoided when calling a number within a city where one of your remote locations exists. A properly configured multisite VoIP system can route the call to exit the system at the PSTN connection closest to the called party’s location, thus minimizing or even eliminating toll charges.

The diagram above portrays a call made to a business partner located in Berlin, where your company has an office. Your VoIP telephony system is already configured to know that a connection to the PSTN exists in the destination area code. The IP PBX manipulates the entered telephone number, routes the call through the WAN, has the call exit the system at the PSTN connection in Berlin, and terminates it at your partner’s telephone. This bypasses long distance and international toll charges and charges you only the portion of the call that is actually routed by a telco, specifically, from the PSTN connection in Berlin to your partner’s landline. From the telco’s point of view, this is a local call, so only local call charges (if any apply) would be charged.

If your multisite implementation crosses state, national or international boundaries, TEHO will be useful to your business. Nevertheless, the following issues must be kept in mind.

Despite the challenges inherent in implementing a multisite telephony system, its benefits can be immense. Primary advantages include a reduction in telco toll charges for long distance and international calls that are routed over a WAN, as well as the simplification of the corporate directory through short-code communication between the sites.

The 3 most common hybrid deployments for VoIP-to-analog solutions