How to set up DSPs for optimal conferencing performance

For small voice networks with only a few dozen phones that exist on a single site, design considerations for digital signal processors (DSPs) will probably not keep you up at night. In fact, you may never have to think about them at all! But for larger multi-site networks, the placement of your DSP resources is important, since when not placed appropriately they could interfere with conferencing performance. In this article, we outline what you need to know to design your network so DSPs work the most efficiently for you.

DSPs are the specialized hardware that employ the mechanisms of voice digitization and encoding in VoIP communications, but they are not limited to digitizing voice. DSPs multiplex, encode, transcode, and introduce a series of voice-specific features that make your conversations more pleasant and productive. You can think of them as the heart of VoIP.

Conferencing is arguably the most resource-intensive process that DSPs perform and can introduce problems in multisite deployments. The location where the multiplexing takes place affects the network as well as the resources being used. For example, for a small number of participants, the DSP of the initiating phone plays the role of the conference bridge, often bridging between three to five participants. In this case, all participants send and receive their voice packets between the conference originator and themselves, as shown in the following diagram. 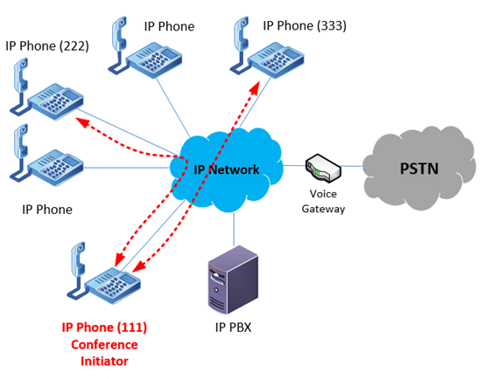 In this scenario, phone 111 has initiated a conference call with phones 222 and 333. All phones exchange voice packets with the DSP in IP phone 111 and receive the multiplexed stream of packets from that phone. 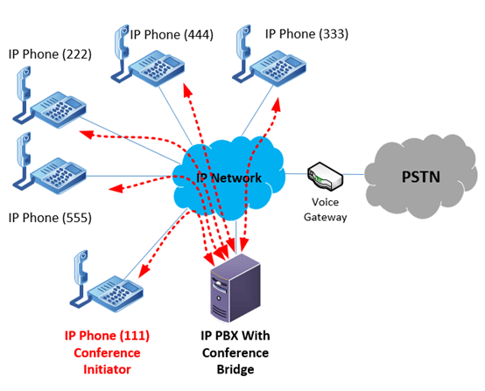 Things get even more complex when you have multi-site deployments. As an example, take a look at the following scenario where four phones, two at each remote site, are participating in a conference.

In this situation, the conference bridge is found within the voice gateway at one of the two sites. For an evenly balanced conference with two phones at each site, this is fine. However, imagine a situation like this:

Some additional considerations for DSPs include:

Even though DSPs may not be given much consideration by VoIP network engineers, it is important to know what they are and how their performance and configurations affect your network. We hope this article has shed some light on this little discussed but important subject.

Customizing a VoIP deployment for your multi-site customer