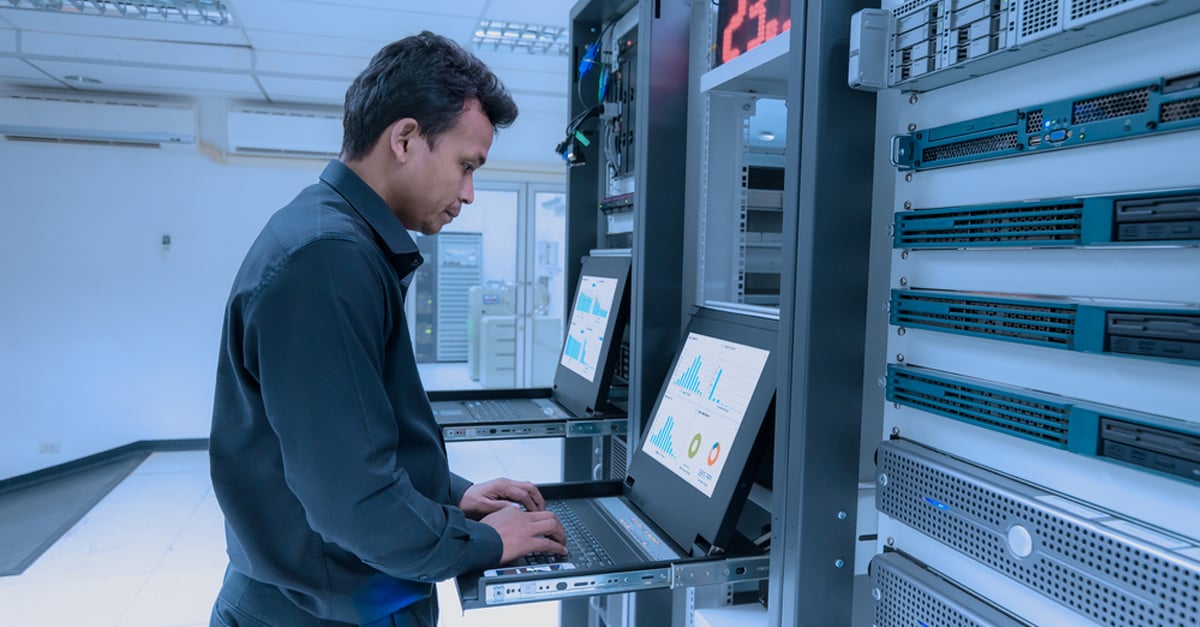 A major challenge inherent in designing and maintaining an enterprise network is the administration costs. Software-defined networking (SDN) can dramatically reduce both the hard costs (money) and soft costs (time) of managing a network. Although this tends to be the most compelling argument in favor of using SDN, it in fact offers may more advantages than this. In this article, we introduce SDN and examine some of its key benefits.

Traditional network design and administration involves the use of specific devices, such as routers, switches, wireless access points, voice gateways, firewalls and others. Each device is discrete and plays a specific role in the network. There are physical connections between the devices, and each one is configured separately. Connect them all together, and you have your network.

Such a setup works fine, and there really isn’t anything wrong with it. However, today’s networks are called upon to address a number of business needs, which often necessitate the integration of any number of services such as voice, video, IoT, wireless, cloud computing, and security. In turn, each of these services needs specific network specifications, all of which must be implemented in an environment where bandwidth requirements are ever-increasing.

As a result, networks have evolved into highly complex entities. This means that it is becoming more costly, more time-consuming and, frankly, more difficult to configure, administer, and manage network devices individually.

SDN to the rescue

SDN is an approach to network management that enables you to configure the network in a centralized manner. Practically, this means there are mechanisms in place that allow an administrator to approach the configuration of a network as if it were a single entity rather than a complex system of distinct devices. SDN not only makes network configuration more efficient, but it also allows you to harmonize configuration parameters across all network devices. In plain English, this means that any feature applied, such as QoS for example, will be enabled on all associated devices, so they work together to enable the feature network-wide.

SDN is similar to SD-WAN technology, but is more geared toward the entire enterprise network rather than just the connection to the outside world. Some define SD-WAN as part of SDN while others consider it distinct. SDN is to networking as cloud computing is to servers and services.

To help articulate how SDN works, it has been conceptually separated into three layers. These are depicted in the following diagram and further explained below. 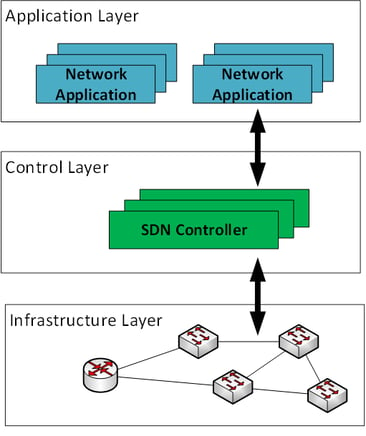 Infrastructure layer – This layer contains the network devices. These are the routers, switches, firewalls and other devices that make up the physical infrastructure of the network. These devices must be compatible with an SDN protocol in order for them to participate in an SDN arrangement. Network devices are instructed by network services found in the control layer.

Control layer – This layer is where the SDN controller resides. This is the entity – either a physical network appliance, a physical server, or a virtual server – that controls the SDN process. It translates the requirements from the SDN application layer before sending them down to the devices in the infrastructure layer, and it provides an abstracted or summary view of the network to the SDN applications, which includes statistics and event logging.

Application layer – This is the layer that contains the SDN applications. These are programs that explicitly and directly communicate their network requirements and desired network behavior to the SDN controller. Each application deals with a different aspect of the network. Practically speaking, these programs are the interface with which the network administrator interacts, either in the form of a web interface, a command line interface, or both.

A simple example will help understand how an SDN infrastructure functions. Let’s say your enterprise network is composed of five routers, two firewalls, sixteen switches and twenty-five access points. This infrastructure is distributed across one headquarters campus and two branch offices. You have a multisite VoIP deployment, and you are running some VoIP applications over a Wi-Fi network. You now want to employ Quality of Service mechanisms on the network so that voice packets will enjoy priority during network congestion.

With traditional network administration, you would connect to the management interface of each individual switch, router, firewall, and access point, and enable the appropriate mechanisms. This can take several network administrators anywhere from a whole day to several days, especially since coordination between devices must be ensured. In addition, some downtime may be experienced, and troubleshooting will often be necessary since such configurations are prone to errors.

Alternatively, using an SDN solution, a network administrator can enable QoS mechanisms by connecting to the QoS SDN application and enabling the required features. The application will send commands to the controller, which will convert those commands to the appropriate configuration parameters of each individual device. These configuration parameters will then be pushed out to all the devices simultaneously, essentially enabling the feature on the network from end to end in a matter of minutes.

This example is a good segue into a discussion of Network Automation and Orchestration. Using scripting languages such as Bash and Python, SDN can be configured to automatically respond to specific events that occur on the network, allowing it to dynamically change according to the current network needs. For example, as traffic patterns change, routing paths and decisions can be automatically adjusted to accommodate those changes. As networks become bigger and more complex, such dynamic customization can be valuable, if not essential.

This article introduces software-defined networking and examines its main time- and resource-saving functions. For networks that exceed a certain size and complexity, SDN can save both money and time, while dramatically increasing network efficiency.