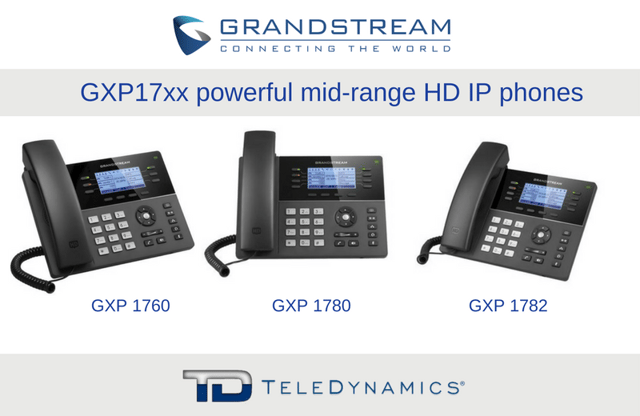 Telecommunications infrastructure can be one of the biggest costs for a small- to medium-sized company, so it’s critical to find a solution that strikes the right balance between value and cost, while at the same time ensuring scalability so the system can grow along with the business.

IP phones often comprise the bulk of the cost of a business telephone system, so choosing the right endpoints is an important part of the functionality-cost ratio. Developed specifically with growing businesses in mind, Grandstream’s mid-range GXP17xx series IP phones achieve this balance remarkably well.

The GXP17xx series has been developed specifically to scale with growing businesses. These endpoints provide all the basic features expected from modern IP endpoints, plus some more advanced functionalities that can be progressively integrated as the business expands. This allows enterprises to invest more into growing their business, without having to give up many of the useful and sometimes vital more advanced features. With a stylish design and mid-range call capacity, such phones are ideal for fast-growing SMBs requiring IP telephony features to evolve along with their business.

The Grandstream GXP17xx IP phones simplify deployment and management on a number of fronts. These include 802.3af Power over Ethernet (PoE), a switchport for connecting a workstation PC, and automated provisioning using the TR-069 standard or AES encrypted XML files, just to name a few. If your customers are using a Grandstream UCM IP PBX appliance, Zero-Config provisioning can also be employed for all GXP17xx models.

The GXP1780 and GXP1782 models provide the following enhancements to the features listed above:

The Grandstream GXP17xx series of mid-range IP phones strike just the right balance between functionality and cost. With three different models, each offering varying feature sets, customers can choose the endpoint that best suits their needs.

Thought videoconferencing was not for SMBs? Think again.