For those familiar with commercial-grade WAN technologies, connecting the internal network to the outside world may seem straightforward. However, large enterprises with thousands of employees and internal services whose existence depends on connectivity require more advanced WAN technologies, which can be far from simple. In this article, we’ll take a look at some of the most common high-grade WAN technologies and the characteristics of each, to help you decide which is right for you.

Enterprise networks should never use commercial-grade services for their primary WAN connection (without SD-WAN), because they do not provide the reliability, guaranteed bandwidth, flexibility, and level of service (SLAs) that are required for such networks. High-grade WAN technologies, on the other hand, offer all of these vital features and can be customized for the requirements of each customer.

The Open Systems Interconnect (OSI) model is used to aid professionals in network design and troubleshooting. WAN technologies operate on the lowest two layers of the OSI model: The physical and data link layers. 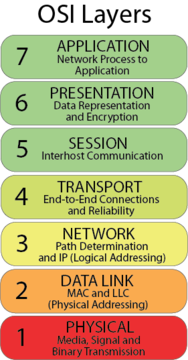 The physical layer of the OSI model defines the physical medium that carries the information, as well as the encoding method, which is the way in which information is placed on that medium. The two most common physical layer WAN technologies used today for large enterprises are fiber optic cabling and microwave wireless links.

Running a WAN over fiber optic cabling, from a technical standpoint, is the preferred choice due to the long distances, high speeds, and robustness of the technology. Fiber optic networks are usually installed underground and maintained by various ISPs, primarily in urban areas. Although used as a backbone technology for decades, it has only been relatively recently that fiber to the customer premises has been a financially viable option. Fiber is still by far the most expensive WAN technology as far as initial investment costs go. However, because installed cabling can last for decades – an eternity as far as the telecom industry is concerned – the return on investment can be substantial. Fiber optics use light, either from light emitting diodes or lasers, to send data over the cable.

As encoding technologies, data density, and data speeds increase, they can be employed over the already installed fiber by simply replacing the equipment on both ends of the cable. The performance increases over the same physical infrastructure, essentially future-proofing the investment.

The limitations involved with fiber are those of cost and availability. Although ISPs are rapidly deploying more extensive fiber networks, there are still many areas that are not covered. For this reason, it is primarily urban areas that enjoy fiber WAN services. For some businesses, it may be worth investing in their own fiber network by funding the installation of new infrastructure to reach the premises, if it's not prohibitively expensive or otherwise unfeasible.

Microwave links are a wireless alternative to fiber and are typically cheaper and somewhat more flexible, although they don’t present the same robustness and sheer speed. These links are normally reserved for locations where fiber is unavailable.

Whenever an enterprise requests a new WAN connection, new infrastructure is installed at the customer’s premises as well as at the ISP’s closest point of presence. Microwave antennas, which resemble large drums, are erected to create the link between the internal network and that of the ISP. Microwave links require a clear line of sight between the two antennas, and can reach distances of about 40 miles, although most links are much shorter.

These links use a licensed band of frequencies, which ensures that your link will not experience interference from other nearby sources, but this of course adds to the cost of the technology. Terrestrial microwave links (as opposed to satellite links) use the Q band, with frequencies between 33 and 60 GHz. On the downside, like all wireless technologies, various atmospheric phenomena such as rain, humidity, and haze can affect the quality of the signal, somewhat reducing maximum available speeds.

There are other technologies such as satellite links, Wi-MAX, leased lines, and serial connection services, but these in general are comparably limited in their use as primary WAN links, especially for large-scale enterprise networks, and are thus beyond the scope of this article.

So far, we’ve talked about bringing the physical connection to the customer premises. On top of this physical layer of technologies, we can implement various options. Two of the most commonly used technologies include Metro Ethernet and MPLS, both of which can be implemented over either fiber or microwave.

Ethernet was initially created strictly as a LAN technology. Its design, however, is so ingenious that it has developed over the forty years of its existence into a much more versatile protocol. Ethernet is almost exclusively used on internal networks worldwide, and also has a substantial market share for high-performance WAN services.

Ethernet’s popularity as a WAN technology is not surprising, since it uses the same technology as the LAN and there is therefore no need for specialized terminating equipment to translate the internal protocols to those used on the ISP’s network. This simplifies configuration and introduces a high degree of interoperability between the ISP and the customer’s network. Routing protocols, quality of service implementations, and WAN link redundancy can be effortlessly negotiated between provider and subscriber. Metro Ethernet is ideal both for interconnecting multiple sites and for connecting to the internet directly.

Ethernet speeds today are reaching in excess of 400 Gbps and Terabit Ethernet is in the works for the near future, so there is no shortage of necessary speeds from this technology.

Multiprotocol label switching is a routing technique used by telecommunications networks that routes packets through the network using path labels rather than long network addresses. MPLS operates at a layer that is generally considered to lie between traditional definitions of the data link layer (layer 2) and the network layer (layer 3), and thus is often referred to as a layer 2.5 protocol.

The primary purpose behind the design of MPLS was to encapsulate various network protocols, hence the "multiprotocol" reference on its name. So, MPLS can encapsulate and send IP packets, Ethernet frames, native ATM, and several other types of data. 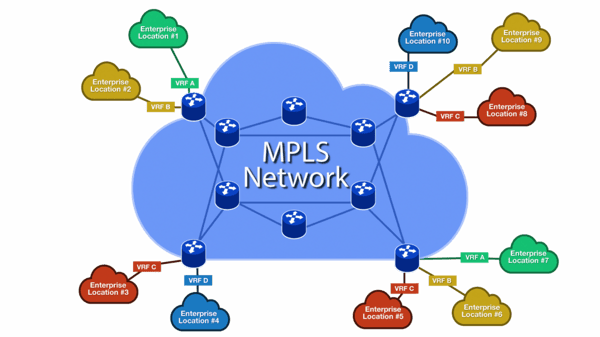 One of the primary benefits of MPLS is that ISPs can have a single MPLS network, and with the appropriate label switching technology can interconnect multiple enterprise locations over the same infrastructure using what is known as a Virtual Routing and Forwarding (VRF) domain. Even if the different locations use the same internal IP address spaces, each VRF is an independent domain that can be used to successfully exchange traffic between the correct sources and destinations.

There are other WAN technologies with similar functionalities such as ATM, Frame Relay, SONET/SDH, and PDH. Yet, MPLS has largely superseded the first two while Metro Ethernet is much cheaper per bit/s than the second two, at least as subscriber access technologies.

As mentioned before, there are many combinations of technologies that can be used. Both MPLS and Metro Ethernet can run over fiber or microwave links. Note also that because MPLS is a “Layer 2.5” protocol, it can be configured to run over Metro Ethernet as well, something that may be useful for some enterprises. The combination of technologies chosen depends on cost, availability, and the requirements of the WAN connections. Some things to think about when considering these technologies and the designs being implemented include:

Redundancy – No matter how robust a technology is, there is always the possibility of failure. For this reason, redundancy should always be designed into the WAN network. This may be in the form of a second connection of the same type or a different type. For example, an enterprise may have a Metro Ethernet connection over fiber connecting to the internet and to remote branch sites, and also a microwave link over MPLS that functions as a backup. Or two WAN connections may function simultaneously to provide load balancing and to achieve a level of efficient use of the bandwidths made available.

SD WAN – Software-defined WAN is a cutting-edge development that is beneficial for both commercial- and high-grade WAN technologies. SD-WAN facilitates the merging of multiple WAN connections to provide an increased efficiency in their use while allowing one connection to deliver a seamless backup to the other. Although useful for commercial-grade WAN technologies to increase their reliability and robustness, the use of SD-WAN for high-grade WAN connections goes one step further by dramatically increasing performance.

SD-WAN has the following characteristics:

All of these functions in combination with high-grade WAN technologies result in a well-honed and robust network edge suitable for even the most demanding enterprise customer.

Looking at high-grade WAN technologies in detail reveals the great multitude of options available to enterprises today. Depending on availability, location, and cost, organizations can choose the combination of technologies and services that are right for them.