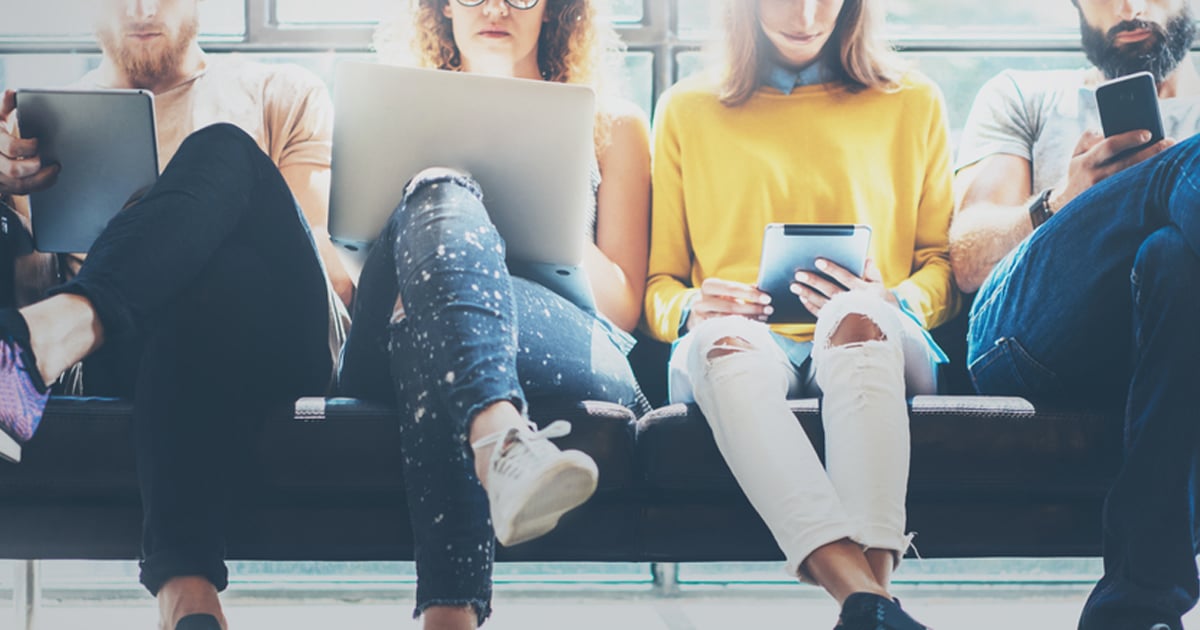 Knowledge is power! That’s why at TeleDynamics, not only do we offer exceptional products and white-glove customer service, but we also share principles pertaining to telecommunications technology with you to help equip you to offer the highest-quality service possible to your customers. In this article we explain the fundamentals of Wi-Fi, so you can have an in-depth understanding of the different deployment scenarios and options.

Wi-Fi is a series of technologies that have been developed to allow devices to connect wirelessly to an IP (internet protocol) network. Devices are able to connect to a wireless LAN (WLAN) using radio frequency (RF) electromagnetic waves, essentially creating a wireless version of a wired Ethernet LAN. Wi-Fi technologies have been standardized over the years by the Institute of Electrical and Electronics Engineers (IEEE) within the 802.11 family of standards. This family of standards has been developed so that Wi-Fi can seamlessly interoperate with wired Ethernet, which uses the 802.3 family of IEEE standards.

Practically, this means that any electronic devices with a transceiver that conforms to these standards can participate in a wireless network. This includes PCs, laptops, tablets, smartphones, and even less traditional networked devices such as IP cameras, sensors, smart thermostats, wearable technologies, and smart appliances.

Compatible devices can connect to a wireless access point, which in turn is usually connected to some network infrastructure, which in most cases is also connected to the internet. Connectivity between the access point and clients is typically achieved within a distance of about 80 feet indoors, or up to 150 feet outdoors. These distances will vary greatly depending on things like obstacles, interference from other RF sources, and access point and client output power and capabilities. Depending on the standard used, and the distance between devices, speeds can vary anywhere from several hundred Kbps to Gigabit speeds. Access points are capable of serving anywhere from one to close to one hundred users (or more), depending on a wide variety of factors. Wi-Fi can also be used to interconnect two remote fixed sites that may be separated by a distance of several miles in a point-to-point scenario, with the appropriate hardware.

It is important to note here that RF communications do not occur strictly on a specific frequency, but on a range of frequencies. Even FM radio behaves in this manner. When you tune in to a specific station, 107.5MHz for example, you are tuning in to a particular range of frequencies surrounding that central one, from 107.4 to 107.6MHz. This is why FM radio stations are separated by a minimum of 200 kHz, allowing stations at 107.1, 107.3, 107.5 etc. and not in between.

Although still in extensive use today, the 2.4GHz frequency for Wi-Fi has several problems, beyond the relatively limited number of non-overlapping channels. Interference from consumer products such as cordless phones, baby monitors, and microwave ovens can often cause disruption in service, as these devices use similar frequencies. Also, neighboring Wi-Fi networks may use interfering channels to function, since there are so few channels to choose from. Because of the widespread use of Wi-Fi, the 2.4 GHz frequency range has quickly become saturated.

Wi-Fi technology functioning at 2.4GHz can at best deliver speeds of up to 300 Mbps, and only under specific conditions. This can be achieved by combining multiple channels, but this further restricts the choice of channels you can use to minimize interference.

Because of these inherent problems with the 2.4GHz frequency, newer Wi-Fi standards take advantage of the much more flexible 5GHz frequency range. Although it is true that a frequency of 5GHz can encode more information than communications that occur at 2.4GHz, the primary advantage of this frequency is the fact that there are many more available non-overlapping channels. This is not inherent in the frequency itself; it is just that frequency allocations are such that a much broader range of frequencies are available for use. The 5GHz spectrum provides channels 7 to 196, of which specific ranges are allowed in each country. Channels can vary between 10 to 160 MHz in width, supplying more bandwidth, higher speeds, and more flexibility when it comes to choosing channels. Part of the available bandwidth with channel designations in the 5GHz frequency range can be seen below.

With all its advantages, the 5GHz frequency for Wi-Fi does have one drawback. In general, higher RF frequencies have smaller ranges. For this reason, for similar power outputs, a 2.4GHz deployment will cover much more area than a 5GHz deployment. This must be taken into account for network design, because a purely 5GHz network must have a higher density of access points to cover the same space.

Many modern Wi-Fi standards employ multiple-input and multiple-output (MIMO), which is a series of specialized technologies that increase the capacity of a radio link. MIMO uses multiple antennas to take advantage of what is known as multipath propagation, a phenomenon of wireless communications that results in radio signals reaching the receiving antennas via two or more paths. This results in the ability to send and receive more than one data signal simultaneously over the same radio channel, resulting in an increase in throughput.

When deploying a Wi-Fi network, it is important to verify that all local laws and regulations are being followed. Most RF frequencies are licensed in order to avoid interference between applications, but Wi-Fi at both 2.4 and 5GHz frequencies operates in what is known as the Industrial, Scientific and Medial (ISM) radio band. ISM contains unlicensed frequencies reserved worldwide for applications such as IEEE 802.11 Wi-Fi.

Although most Wi-Fi devices are designed to conform to these limitations, it is possible to override them, so care must be taken not to do so.

The central component of a Wi-Fi network is the wireless access point (WAP). The WAP is a device that interconnects the wireless clients to the network. It is the equivalent of an access switch on a wired network. The WAP, in turn, is connected to the rest of the network infrastructure, usually via a wired Ethernet connection. 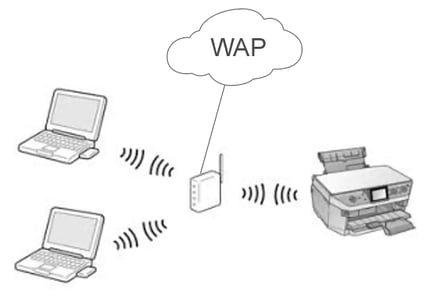 WAPs come in all shapes and sizes, and conform to specific IEEE Wi-Fi standards. Depending on the type and model, WAPs vary with respect to:

Number of simultaneous users – Typically, a WAP can support multiple wireless clients. The number of clients depends on various characteristics such as the CPU and memory of the WAP itself, the number of antennas, and the Wi-Fi standard in use. This number will also depend on the actual applications being used by each end device and how bandwidth-intensive they are at any point in time. The most powerful WAPs today can support well over a hundred users, providing satisfactory bandwidth to each individual client.

Throughput per user – Although this depends heavily on the actual infrastructure to which a WAP has been connected, it also depends on the capabilities of the WAP itself. Once again, CPU and memory of the WAP are a factor, but so is the use of specialized technologies such as MIMO. Since the wireless medium is a shared resource, additional factors include the number of users connected at any one time, the throughput being demanded by each user, and the distance from the WAP of each individual wireless client.

Range – How far a client can be from a WAP rests on environmental factors such as obstacles and interference. However, all else being equal, the range of a WAP depends on a combination of the frequency being used, the power output, and the direction of the WAP’s antennas. Because connectivity goes in both directions, the range also depends on the output power of each individual client that allows returning signals to reach the WAP. As range increases, the quality of the connection and the resulting throughput will also be affected.

Additional components used in a wireless network include:

Wireless client – This is the end device that connects to the network, such as a smartphone or a laptop. These devices, like WAPs, also have RF transceivers to both send and receive data. Each client can support particular standards, and these must be compatible with the WAP to which they are connecting.

Wireless Controller – This centralized device is used to configure, manage, and control multiple WAPs. This is especially useful for larger wireless networks with tens, hundreds, or even thousands of WAPs. This allows the wireless network to be configured as a single entity from the controller, rather than having to configure each individual WAP. The controller can be physically located on site or can exist on the cloud. Parameters that can be configured include network names, security features, bandwidth limitations, RF power and frequency parameters, and the use of supported Wi-Fi standards. Any changes made to the network are then sent to each individual WAP by the controller, conforming them to the requirements of the network.

Wi-Fi is a technology that has matured over the past twenty years to a point where it can provide extremely high-end services in a very reliable way. Knowing the full range of capabilities it has to offer and understanding how it delivers them will bring you one step closer to making the most appropriate decisions when it comes to installing or upgrading your customer's Wi-Fi network.

What's so great about the Grandstream GWN7610 WAP