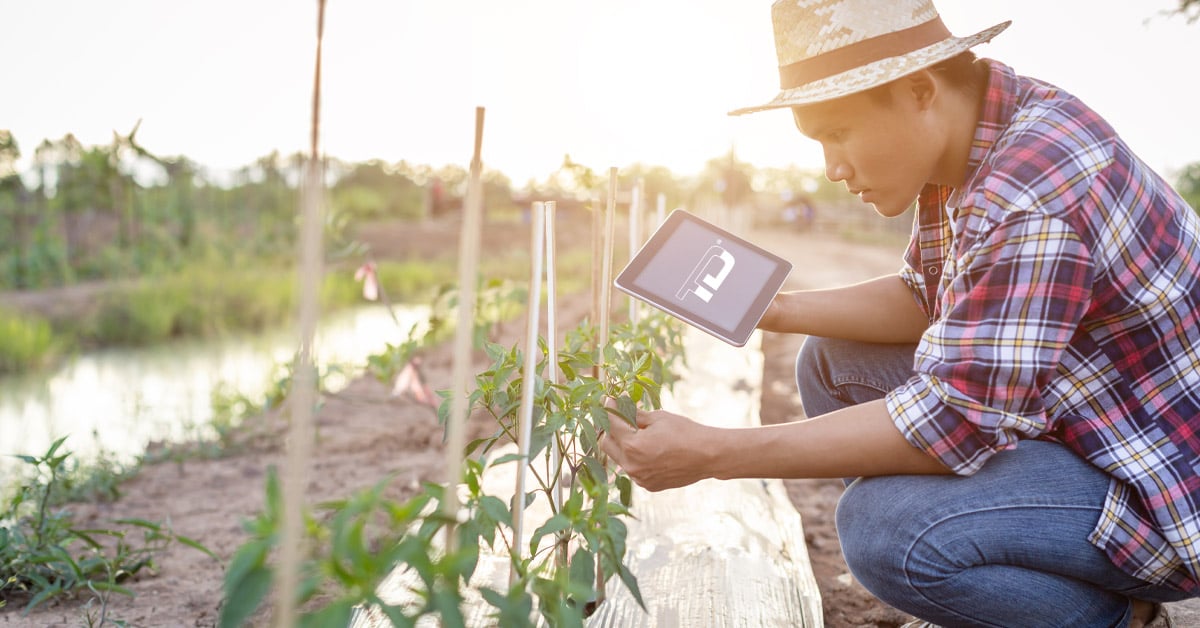 Wireless Internet Service Providers (WISPs) play an integral role in delivering internet connectivity to areas where wired connectivity is not economically viable. Rural, remote, and mountainous regions are the primary areas where WISPs thrive. In many cases, WISPs are the only option for connectivity, making them a vital component of a nation’s telecom infrastructure.

There are many technologies that help support the services provided by WISPs. One that is being leveraged more and more in recent years is Multiprotocol Label Switching (MPLS). This topic received considerable airtime at WISPAMERICA this year.

MPLS is a routing technique in telecommunications networks that directs packets from one node to the next based on path labels rather than network addresses. Traditionally, in a packet switched network, every time a packet reaches a node, the destination address is read, and based on that address, the next hop node is determined. The packet is then sent out of the appropriate interface, as shown in the following diagram. 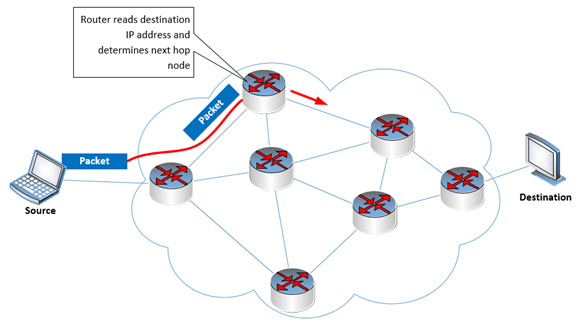 MPLS, however, does away with long and often difficult-to-process IP network addresses and determines routing based on a series of labels that are introduced into an MPLS header that is prefixed onto each packet. This label is used only within the realm of the MPLS network to get the packet to its intended destination.

The primary benefit of MPLS is that routing at each node requires much less resource-intensive lookups in the local routing table in order to determine the next hop. This results in much faster traffic flows. There are additional benefits, as well:

ISPs maintain MPLS networks in order to deliver secure and virtually separated routes between many customer sites. The following diagram depicts the connectivity supplied to customers A and B over the same MPLS infrastructure, while keeping their communications distinct, separate, and secure. 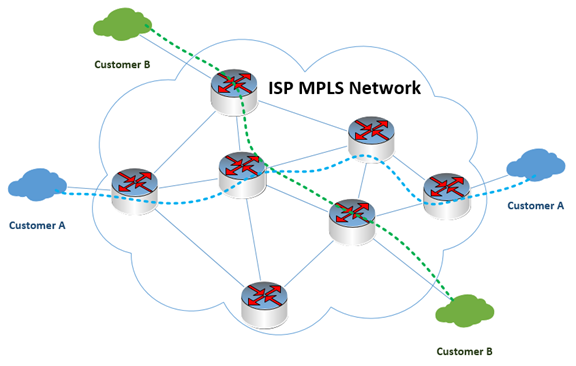 The primary benefit here for ISPs is that the same infrastructure can be used to deliver hundreds and even thousands of VPNs to multiple customer sites in a scalable manner. No matter how many customers connect, connectivity will still be fast, reliable, and secure.

How MPLS can benefit WISPs

What does this have to do with WISPs? MPLS seems to be a wired technology; don’t WISPs distribute wireless connectivity? Well, a WISP network is composed of various network components. The “last mile” employs wireless technologies and some of the backbone network may also be delivered using wireless links. Even so, there is always a wired component to which the WISP base stations must connect. This is the WISP WAN or backbone network. This network, in turn, connects to the internet via one or more high-speed connections. The following diagram illustrates a typical WISP network. 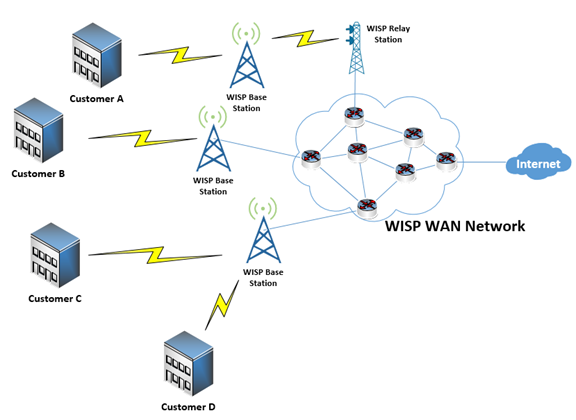 Let’s focus in on the WISP WAN for a moment. This network can be a series of individually leased links between base stations, it can be a metro Ethernet infrastructure of an ISP subscribed to by the WISP, or it could be an MPLS network. There are quite a few benefits to using MPLS for this portion of the network infrastructure:

Cost – Because MPLS is a shared network – that is, multiple customers share the MPLS network resources – it is generally more economical than dedicated links, leased circuits, or metro Ethernet options.

Versatility – MPLS supports a wide variety of protocols. It can tunnel IPv4 or IPv6 protocols, or it can even tunnel Ethernet, allowing a WISP to interconnect their base stations at Layer 2 and provide their own routing functionality exclusively on the WISP network. Additional protocols that can be transmitted by MPLS include IPX, Token Ring, FDDI, ATM, Frame Relay, and point-to-point links.

Deliver inter-site connectivity – WISP clients will be able to take advantage of the MPLS feature that can interconnect remote sites using distinct labels on the MPLS infrastructure. This essentially creates virtual circuits or VPNs through the network, allowing remote sites to have inter-site connectivity. This is especially useful for customers with multi-site deployments that are served by a WISP.

WISPs have the option of subscribing to an MPLS service from an ISP, which will allow them to add all of these great services and versatility to their networks. However, if your WISP is large enough, it may be worth creating your own MPLS network. If you have the physical sites already leased and have sufficient bandwidth between these sites, you can replace simple bridging between base stations with a full-fledged, fully private MPLS network of your own. Don’t underestimate the benefits of having full control over your network, but keep in mind the overhead and expertise that this will require.

One additional concern to keep in mind is to ensure that your internet connectivity is highly available. You may want to configure multiple routes to the internet on your network to ensure redundancy for your customers. This, in addition to performing load balancing between your internet links, is essential for ensuring a high level of service.

WISPs are vital for disseminating economically viable internet connectivity to areas that would otherwise have very few and extremely expensive alternatives. By taking advantage of other technologies like MPLS, WISPs can remain competitive and continue to deliver an accessible as well as feature-rich option for connectivity.