How to deal with jitter, packet loss, latency and signaling delay 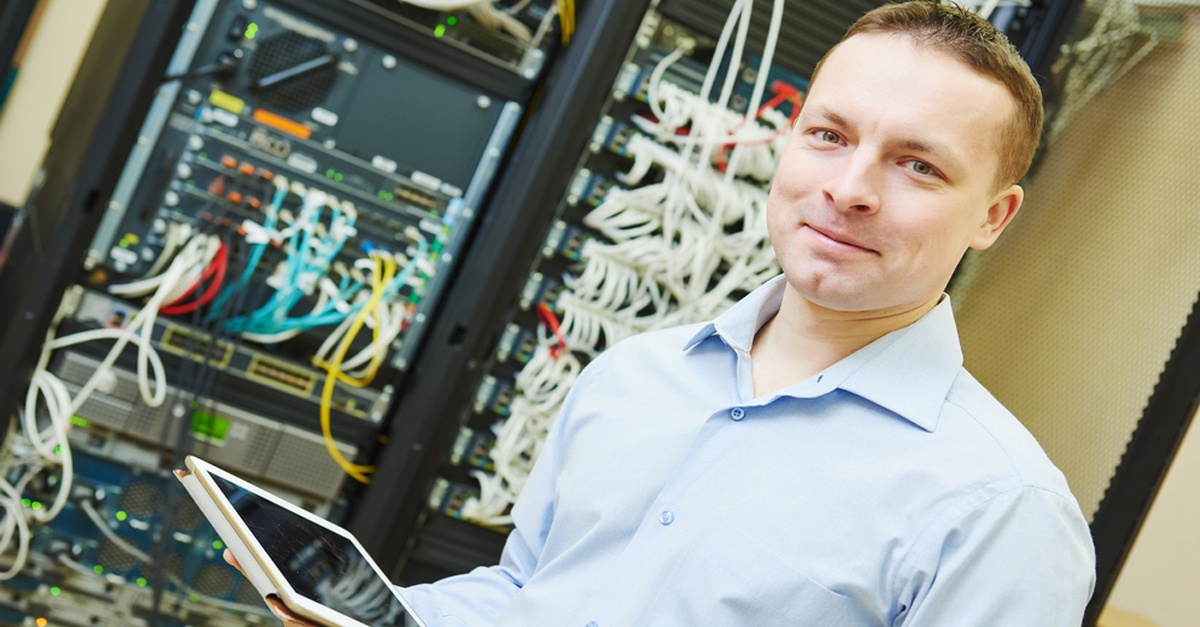 Some of the most difficult issues to troubleshoot on a network are failures resulting in a degradation of service, a slowdown in speed, or intermittent connectivity, as opposed to a complete disruption in service.

When it comes to troubleshooting issues involving VoIP, this becomes even more acute. Intermittent, low-quality, and metallic-sounding voice, as well as erratic connectivity between VoIP end devices, are all network problems falling into this difficult-to-diagnose category.

Almost all such malfunctions are due to a faulty implementation (or lack thereof) of quality of service mechanisms. In this article, we will look at some of the most common failures of this type, what they sound like, and what should be done to verify and rectify the problems.


Quality of service for VoIP

IP networks, by their very nature, will cause disruptions to voice services whenever there is network congestion. For this reason, Quality of Service (QoS) must be employed to give priority to voice packets. Most of the problems facing VoIP that result in some sort of degradation (as opposed to a complete disruption of service) are almost always due to either a misconfiguration of QoS settings or a complete lack thereof.

Below, some of the most common VoIP problems involving QoS are described along with their solutions.

Jitter is a concept in networking that has become more important with the advent of time-sensitive applications such as VoIP. Strictly speaking, it is the deviation from true periodicity of a presumably periodic signal. Voice packets are expected to arrive at their destination periodically, at a constant rate. Ideally, a packet should arrive every X milliseconds, and X should be constant over time. On real networks however, X is never constant. A slight variation of X of up to +/- 30 milliseconds is acceptable and can be rectified using a jitter buffer. If X varies too much, the jitter buffer will be unable to accommodate the variation and packets will begin to drop. 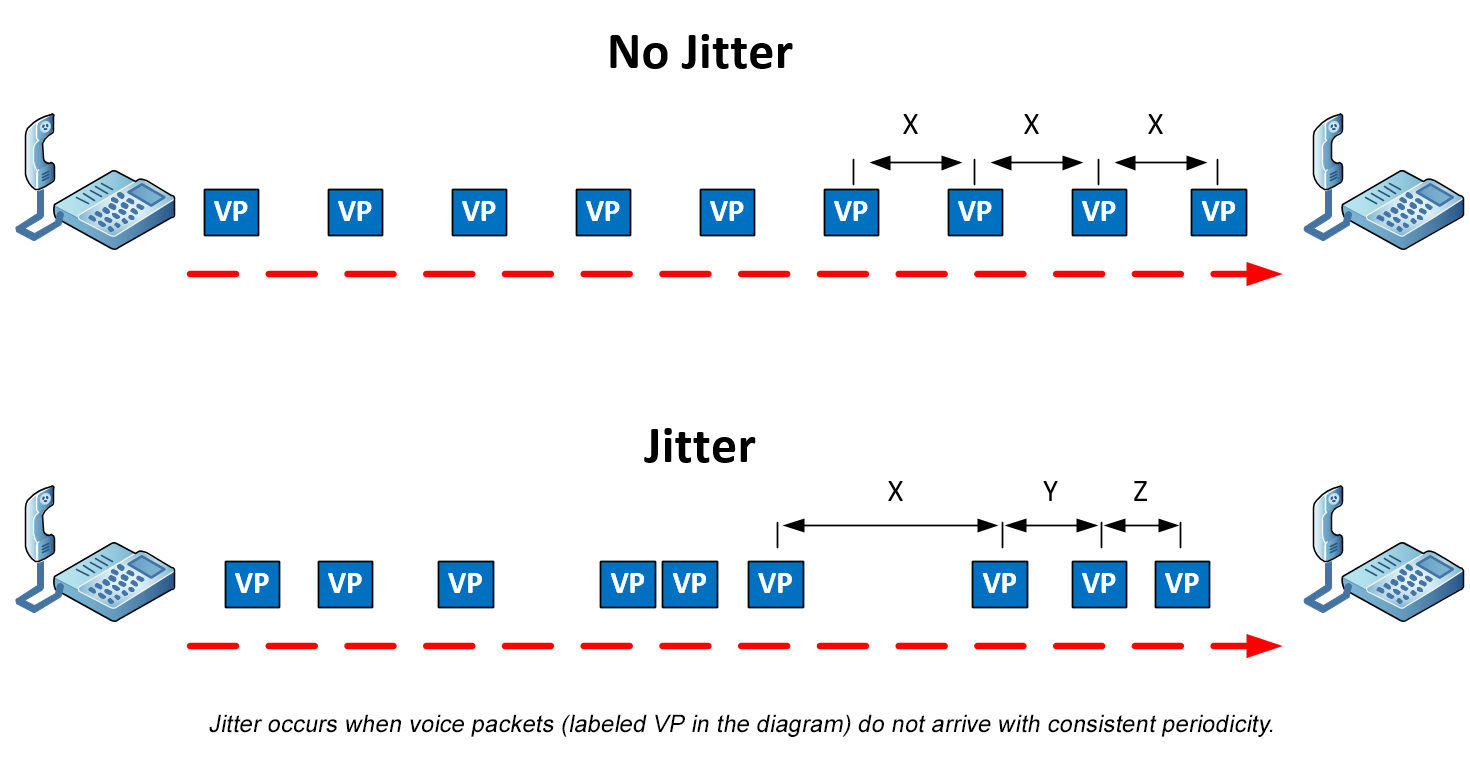 A certain amount of jitter is always observed on any network. However, extreme jitter is very often a result of network congestion, which delays some packets more than others. If QoS mechanisms are not configured correctly on routers and switches, any level of network congestion will result in more extensive jitter.

Jitter results in a garbled voice, where the actual character of the voice is significantly altered. The quality of the voice will also fluctuate as the amount of jitter does. If extreme enough, jitter will cause the voice to become unintelligible.

First, determine if this is an issue occurring all the time or only at network traffic peak times. If it is only at peak times, check the QoS configurations in all intermediary devices that carry voice (e.g., routers and switches) and verify that no packet queues are overflowing. If they are, rectify the problem by employing QoS appropriately or by increasing the priority value of the voice packets within your network. For more on this, refer to our recent article detailing DiffServ.

If QoS issues are verified, the next thing to examine is that the jitter buffer on the receiving device is indeed functioning and is configured with the appropriate size.

If jitter becomes extreme – beyond what a correctly configured jitter buffer can handle – it could lead to packet loss (see below).

Packet loss has some of the most devastating consequences to VoIP services. It occurs when one or more packets traveling over a network fail to reach their destination.

There are several causes of packet loss, the most common of which is network congestion. If too many packets are vying for the use of a link on the network, some will inevitably be dropped. If QoS mechanisms are not employed at all links in the network, congestion will result in indiscriminately dropped packets, including voice packets.

Another cause of packet loss for VoIP is extreme jitter. If jitter exceeds the capacity of the jitter buffer at the receiving device, some packets will be dropped. Ironically, a packet that has successfully traversed the network could be dropped at the destination, just because it arrived too late.

Packet loss causes voice to sound like parts of it are missing. This is also described as choppy or intermittent voice. This makes sense, because each packet contains a small piece of the sound of the voice, which, if it does not arrive, is not heard. However, most VoIP endpoints employ what is called a Packet Loss Concealment (PLC) algorithm which masks the effects of lost packets. PLC is generally effective for a small number of lost packets. When packet loss becomes extensive, these PLC algorithms can cause voice to sound metallic or robotic in nature.

Determine where the packet loss is taking place. Is it due to network congestion? If so, deal with the appropriate QoS configurations on all links carrying voice over the network. If it is the result of extreme jitter, attempt to adjust the jitter buffer in addition to the QoS configurations.

Latency, also known as network delay, is a measure of how long it takes a bit of data to travel across a network from one node to another. Latency, as a measure of delay, is not problematic in and of itself. Latency beyond acceptable levels – specifically, over 200 milliseconds – is what makes it a problem for VoIP networks.

Like other similar network phenomena, latency can be caused by network congestion. However, other issues can also cause latency, including network routing problems, excessively large jitter buffers, and high CPU and memory usage of intermediary devices, to name a few. It may also be due to the sheer distance the packet has to traverse, which is especially noticeable with satellite links.

High latency can have various effects on voice. If the latency is consistent over time, it can result in a delayed response from the participants of the call. When one caller ends a phrase, they may wait several seconds for the person on the other end to respond. This can often result in callers interrupting each other, asking if they are still on the line.

If the level of latency is inconsistent over time, a very different behavior results. Choppy voice will occur when consecutive packets are excessively delayed, or a "synthetic"-sounding voice could result from many single packets being delayed beyond the bounds of the jitter buffer. Excessive latency of particular packets can also result in packet loss.

Latency is not always solvable. If it is due to network distance, such as with a satellite link, then an alternate network technology should be used. For solvable latency issues, determine if the latency is due to congestion, and if so, examine the QoS configurations on all network links. If not, look out for excessively large jitter buffers.

Signaling delay affects the VoIP signaling that is carried by Session Initiation Protocol (SIP) packets. SIP does not carry the voice, but rather allows VoIP devices to communicate control information with each other to set up, maintain and tear down calls. SIP is also used to execute telephony features such as call transfer, call hold, call waiting, and call conferencing, to name just a few.

Signaling delay is a measure of how long it takes a SIP control packet to travel across a network from one SIP device to another. SIP packets are exchanged between VoIP phones, VoIP gateways, IP PBXs, and any other VoIP-enabled device. Any delays longer than 200 milliseconds become noticeable by users and can be considered problematic.

Signaling delay has similar causes as latency. The only difference is that it is applied to SIP packets. SIP packets are different from voice packets in that SIP exchanges are comprised of very few packets. A SIP exchange to set up a voice call may consist of the exchange of three or four packets, as opposed to the tens of thousands of voice packets involved in a conversation of several minutes.

Signaling delay results in the delayed response of a VoIP device to hook switch changes and softkey presses. When you pick up a VoIP phone and listen, the sound of the dial tone may not immediately be heard. When you press the transfer button, it may take half a second to execute the feature. When you hang up, the phone’s screen may take a second to revert to its standby mode display. In general, it can be described as a lack of immediate responsiveness from the SIP phone or endpoint.

The most important thing is to determine is if the problem is indeed due to the delay of SIP packets. Once this is determined, the previously described solutions involving QoS for latency can be applied. Otherwise, start looking at possible faults in the SIP devices themselves.

Recognizing a particular problem in voice can be helpful in diagnosing the fault, and as a first step, it is quite useful. However, the truth is that just hearing the problem is fairly subjective. As a second step, in order to accurately measure phenomena such as latency, jitter, packet loss, and signaling delay, the use of a packet analyzer is highly recommended. This will help you to more objectively measure the potential problems in your voice conversations and give specific measurements of these phenomena that will aid you in identifying the problem and determining its solution. You can find detailed information on how to use Wireshark, a versatile, easy-to-use, and free packet analyzer, to troubleshoot VoIP issues in our recent article on using Wireshark to troubleshoot VoIP.

In this article, we’ve addressed how to recognize and troubleshoot jitter, packet loss, latency and signaling delay in VoIP telephony networks. These malfunctions are often due to the misconfiguration (or lack thereof) of quality of service (QoS) mechanisms.

Quality of service for VoIP networks: IntServ versus DiffServ