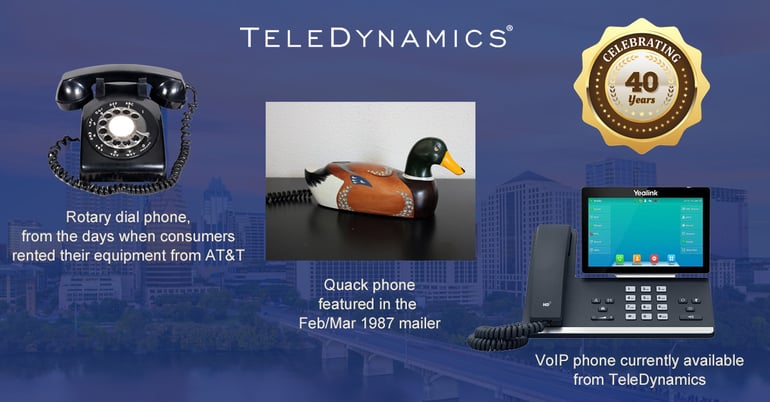 This week marks the 40-year anniversary of TeleDynamics. TeleDynamics was founded in 1981 during a transformative time in the history of telephony.

The telephone industry in the U.S. has its origins in the 19th century, when Alexander Graham Bell founded the Bell Telephone company in 1877. In 1885, the company formed a subsidiary, American Telephone and Telegraph Company (later re-branded AT&T). Then, in 1899, it sold its assets to AT&T, making AT&T the parent company.

Some may remember the time when all of the terminal equipment (including telephones) that connected to AT&T’s network was manufactured by Western Electric, a subsidiary of AT&T. AT&T maintained that this de-facto monopoly was necessary to protect the integrity of its network. However, the resolve of the FCC (Federal Communications Commission) to continue protecting this monopoly began to show signs of weakness in 1966, when a Texas company called Carterphone developed a two-way radio (walkie-talkie) that could hook up to the telephone network. Two years later, the FCC rendered its decision that third-party equipment could connect to AT&T’s network as long as appropriate steps were taken to protect network integrity. In 1977, the FCC went even further with the “Part 68” rule that allowed any equipment to connect to AT&T’s network as long as it complied with certain specifications.

It was within this regulatory context that TeleDynamics was born. Happy Feller understood that the opening up of the market to competing equipment manufacturers would cause explosive growth in the space. He quit his job at AT&T on May 29, 1981 – exactly 40 years ago – and founded TeleDynamics. In September of 1981, his sister, Judy Feller, joined him as a partner in the business.

At first, TeleDynamics was headquartered in Laredo, Texas, near the Mexican border. At that time, consumers in Mexico were already able to connect their own equipment to the telephone network, so sales of telephone equipment were already strong in that market. By contrast, retailers in the United States were just beginning to dip their toes into telephone sales and many didn’t want to be first-movers, instead preferring to wait to see whether other retailers would be successful in selling telephones to consumers before agreeing to do so themselves.

In 1982, the Mexican peso devalued, losing half its value against the dollar and resulting in rampant inflation and a recession in Mexico. This caused the market in Mexico to shrink, while demand in the United States had finally begun to expand. By this time, TeleDynamics had convinced several retailers to carry telephones. Among the company’s first U.S. customers were department stores including Foley’s, Joske’s and Sanger-Harris. In addition to these, a number of independent phone stores began sprouting up around the country.

TeleDynamics then moved its headquarters to Austin, Texas in September 1983. Needless to say, the telecom industry has gone through a lot of change since then. 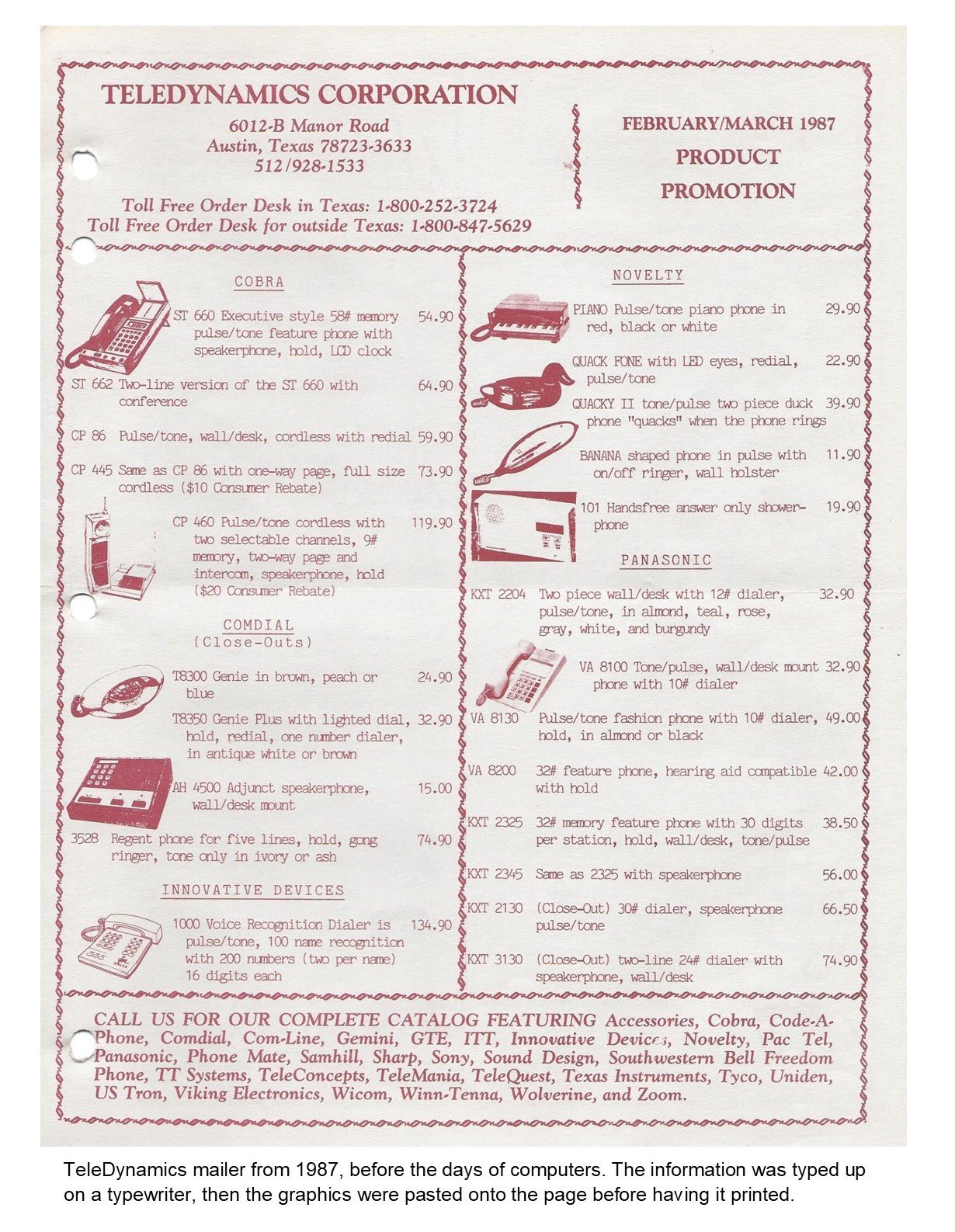 In 1982, the Bell System was forced to break up into several independent companies on the heels of an anti-trust lawsuit. This led to a surge of competition in the telephone market, further fueling telephone sales.

When voice communications are transmitted over data networks, it is referred to as network convergence, meaning that different services are delivered over the same network. Other services and equipment that have come to adopt the IP protocol include facility surveillance systems, videoconferencing, and of course, everything that is connected to the internet, including smart phones, televisions, microwaves and even vehicles.

While much has changed since TeleDynamics was founded in 1981, our unwavering commitment to putting our customers first has never changed. We continue to put our customers’ interests first by offering same-day shipping on all orders placed by 5 p.m. Central U.S. time, drop-ship services, SIP endpoint provisioning, personalized tech support, and more.

We would like to take this opportunity to thank all of our manufacturing partners and valued customers for a rewarding and exciting 40 years. We look forward to serving you for many years to come.

The future of telecommunications: The next 25 years