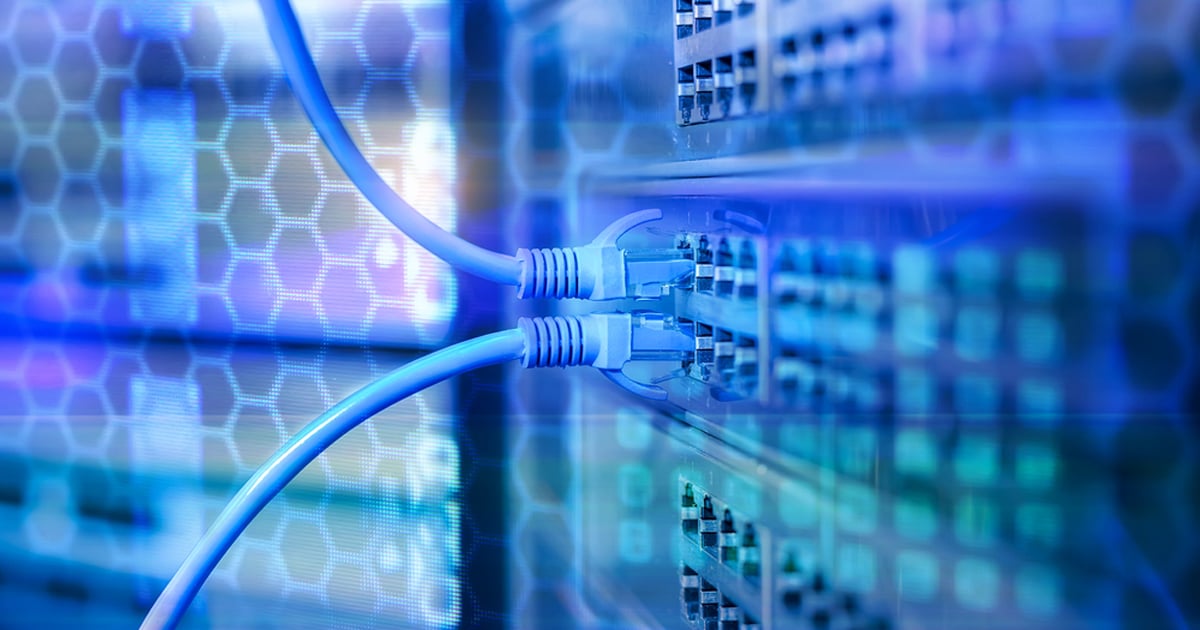 An enterprise network is not truly functional unless it is connected to the internet. The types of technologies that can be used for network edge connectivity can broadly be separated into two groups: commercial-grade and high-grade WAN connection technologies.

The distinction between the two has to do with available speeds, reliability, services, and cost. High-grade WAN connectivity technologies include Metro Ethernet and MPLS, while commercial-grade options include cable and xDSL.

In this article, we examine the commercial-grade WAN technologies (cable and xDSL), how they function, and their most typical implementation scenarios.

Connectivity via an existing infrastructure

Several decades ago, in the era of dial-up internet, 56-baud PSTN modems were all the rage. But as the demand for higher speeds increased, a faster way to connect to the internet was needed. In an ideal world, every home and business would be connected to the internet at multigigabit speeds via a fully connected fiber optic network. Because such universal connectivity is not yet feasible, a way had to be devised to bring broadband services to the subscriber’s premises at a reasonable cost.

xDSL technology uses telephone lines, the infrastructure that arguably has the highest penetration into homes and businesses worldwide. Although it is called Digital Subscriber Line, xDSL is an inherently analog technology. It takes data in digital format, modulates it in analog form and sends it over the wire. A DSL line is terminated on what we often call a modem. This device, however, is not just a modem – in most cases today, it has a switch, a router and a wireless access point integrated into it.

At the other end of the link, at the central office of the telco, is what is called a DSL Access Multiplexer, or DSLAM. This device connects multiple DSL lines and multiplexes them together. xDSL is carried over telephone lines that also carry voice conversations, so the DSLAM is responsible for separating the voice from the data and sending the voice to the telephony exchange and the data to the internet. This is depicted more clearly in the following diagram. 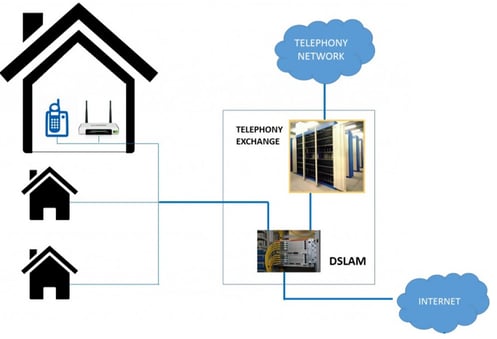 Note here that the xDSL technology exists only between the xDSL device on the customer’s premises, and the DSLAM. As such, xDSL is exclusively a “last mile” or “local loop” technology.

So, if xDSL uses the same pair of copper wires coming into your home or business that deliver telephone services, then what happens to the voice using that wire? Both voice and data can run over the same copper pair simply because each uses a different frequency. Specifically, voice uses frequencies between 300 and 4000 Hz, while some types of xDSL may use frequencies of well over 1 MHz. This means that, if implemented correctly, both voice and data can coexist on the same wire without interference. The following diagram depicts the frequency spectrum used by Asynchronous DSL or ADSL.

DSL uses the same copper wires as those used by the PSTN voice line. Even though it uses much higher frequencies on the same line, these frequencies can and do overflow into the voice channel. This can result in static on the line or even lost data connectivity during a phone call. For this reason, either filters or a splitter must be used to allow both voice and data to function optimally.

The following are examples of a splitter (L) and filter (R).

Many new implementations of xDSL provide VoIP services to the modem itself. Voice is delivered via VoIP packets over the data connection rather than via traditional methods over the wire. This means an analog telephone can be connected into an FXS port on the modem, eliminating the need for splitters, filters, and complex wiring.

xDSL is denoted by the acronym with a lowercase “x” at the beginning. This is because xDSL comes in various flavors, each of which is denoted by a particular letter that replaces the “x”.

Looking carefully at the frequency spectrum shown earlier, you will notice that the upstream frequency range is much smaller than the downstream range. This is because the type of xDSL being used is asynchronous, meaning that upload and download speeds are not the same. This type of DSL is often used for residential or small businesses. These users typically require more bandwidth for downloading than uploading, so ADSL is optimized for such use. Although Symmetrical DSL (SDSL) also exists, Asymmetric DSL has achieved such high speeds that SDSL is no longer being developed.

Some of the most recent high-performance xDSL technologies include:

There is no such thing as a silver bullet. Like most technologies that have been developed to run over an inherently non-optimal infrastructure, there are limitations. The most profound limitation is the wire distance between the subscriber’s premises and the DSLAM. As the length of the wire increases, speeds decrease. This is why xDSL speeds of a particular link are always described as speeds “up to” a certain value.

This limitation is quickly being overcome by moving the DSLAM closer to subscribers. Instead of having a single DSLAM in the central office, telcos are placing connection nodes containing DSLAMs in more remote neighborhoods. These are then connected to the central office via fiber optic cabling, thereby increasing achievable speeds by shortening the distance between the DSLAM and the subscriber.

Connectivity over the cable TV network

Another high-penetration infrastructure used to supply internet connectivity is the cable TV network. Unlike DSL, the cable TV network is a shared medium where multiple users in an area share a common downstream capability. Cable internet is governed by the Data Over Cable Service Interface Specification (DOCSIS).

Cable internet utilizes the same coaxial cable that is used for cable TV coming into the customer’s premises. This cable primarily uses F-type connectors as shown in the image below. Coaxial cable is advantageous compared with other copper media because one of the two conductors provides its own shielding, and the dimensions of the cable are controlled by the dielectric insulator to give a precise distance between the two conductors for the full length of the cable, as shown below.

The result is a well shielded and durable cable that can carry data at high speeds.

Like xDSL, cable internet is primarily an asynchronous WAN technology and is optimized for downloading. Several DOCSIS standards have been developed over the years, the most prominent of which are listed below:

While the maximum speeds are well above those available with xDSL, keep in mind that these speeds are shared among tens or even hundreds of users and can thus vary widely.

Both cable and xDSL are among the most inexpensive WAN connection technologies available. There are a few important characteristics to keep in mind when considering these technologies:

xDSL and cable internet are technologies deployed primarily where a cost-effective solution is necessary, and where extreme levels of availability are not required. Small- to medium-sized businesses or branch offices with anywhere from 2 to 30 or more users are classic examples. Situations where these technologies are unsuitable include:

Even so, there is a way to make commercial-grade WAN connections approach the benefits that high-grade WAN technologies provide. This can be achieved using what is known as Software Defined WAN (SD-WAN). SD-WANs can seamlessly merge multiple WAN connections and technologies. This means you can achieve the same high availability that you would enjoy from expensive high-grade connections with the use of two or three commercial-grade xDSL or cable connections by employing redundancy and load balancing. The cost savings here would be phenomenal, since some high-grade technologies can be as much as twenty times the cost of xDSL or cable. Click here to learn more about SD-WAN.

Commercial-grade WAN technologies have come a long way since their inception. Today they can supply surprisingly fast speeds at refreshingly low costs. For many SMBs or branch offices, these technologies easily meet their requirements. With SD-WAN adding robustness and reliability, you have even more options for your network.