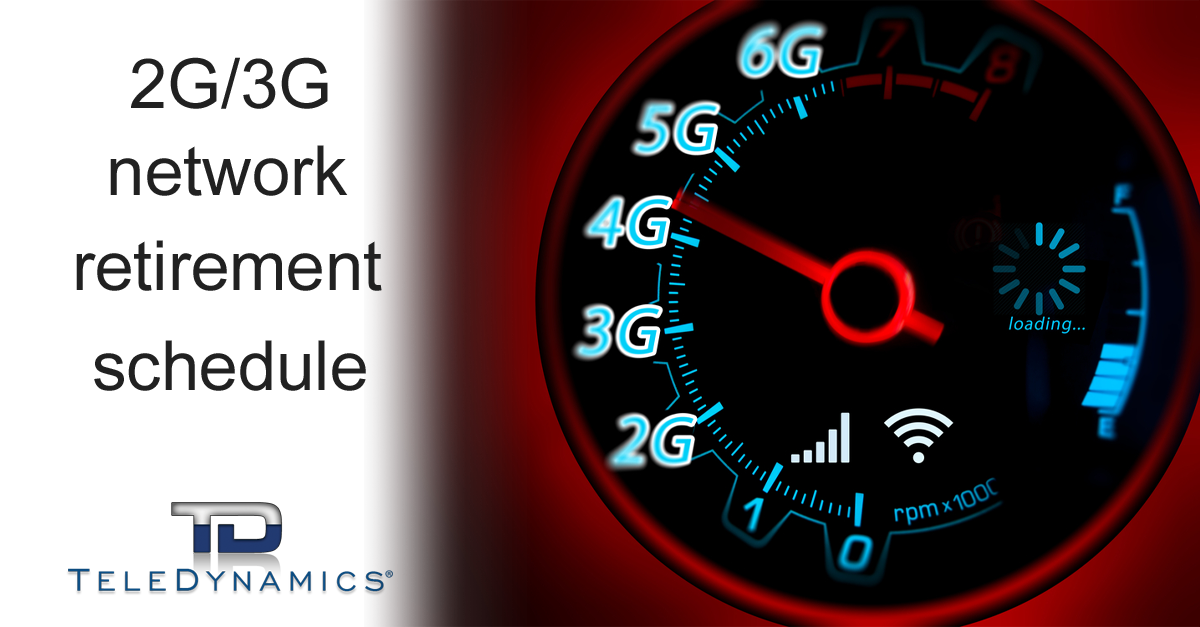 All cutting edge technologies have a specific lifecycle that includes their inception, general adoption, and gradual decline. This is a process that inevitably ends with a retirement of the technology with an end-of-life or end-of-service announcement from service providers. Cellular networks are no exception, and 2G and 3G retirement dates have already been set by most U.S. mobile service providers.

The retirement of 2G and 3G networks have been announced by the four major players in the U.S. market and can be seen below:

Mobile communications have undergone several well-defined generational iterations since the inception of cellular telephony and cellular data communication. An approximate illustration of their operational history can be seen in the following diagram.

When 1G networks were shut down in the mid-2010s, it wasn’t such a big deal, since the subscriber base for these networks was very small, so this event hardly made any headlines. But shutting down 2G and 3G networks is a bigger deal.

When they first came out, 2G and later 3G introduced many new innovations, including encrypted digital voice and secure mobile data communications. This was groundbreaking, as users could now securely communicate and connect to their online services from anywhere within the range of a cellular base station. Data speeds over these two generations evolved from several kilobits per second to well over several megabits per second, with a theoretical maximum of over 40 Mbps.

2G and 3G were the generational iterations that saw the first mass adoption of mobile communications for individual subscribers, delivering primarily voice and data communication to the mobile phone. This increased the user base dramatically, and by the time 4G was first introduced commercially around 2009, there were already over 270 million mobile cellular subscribers in the United States alone.

The data capabilities of these networks was not limited to enabling individuals to check their email or view web pages. Data communications introduced many new and useful applications, including:

Why 2G and 3G networks have such longevity

So why are 2G and 3G networks still being used today? Keep in mind that the first commercially available 2G network was launched in 1991, and 3G in 2001. That means that today’s 2G networks are using technology that was originally deployed over 30 years ago, which is considered an eternity when it comes to the rate at which today’s technologies are advancing.

There are two primary reasons for their continued use:

The first has to do with the fact that 2G and 3G networks are currently used as network technologies that mobile devices could fall back on in the event that 4G or better service is unavailable. This is most often the case in rural areas and in some hard-to-reach urban areas. Even some of today’s most advanced 4G and 5G phones are still designed to fall back to 3G and some even to 2G networks for phone calls.

Secondly, and arguably more importantly, many IoT implementations over the past decade continue to use 2G networks simply because until as recently as last year, it was cheaper to do so. IoT devices don’t break down very easily like mobile phones do, and many such applications have been operating for well over a decade. As the saying goes, “If it isn’t broke, don’t fix it.” Indeed, most telecom providers have kept 2G networks for so long due to the large customer base still using these devices and applications over the 2G infrastructure. Add to this the high and often prohibitive patent licensing costs of new IoT technologies for 4G and 5G networks, and you can quickly see why many companies are still clinging to 2G infrastructure.

What the future holds

Both 4G and 5G networks have been developed to support the needs of many different types of applications. Indeed, 5G has been designed to cater to multiple applications, including massive machine type communication (mMTC), which is specifically designed to not only deliver the type of network thresholds required by IoT, but also to deliver them cheaply, efficiently, and at an unprecedented scale.

Today few people still hold what are colloquially being referred to as dumbphones (as opposed to modern smartphones) that only support up to 3G technologies. Their low usage makes migration easier at this point.

An additional advantage of retiring these networks is that they free up radio spectrum frequencies for use with modern networks.

2G and 3G technologies are being retired to make room for newer and more innovative technologies that allow modern cellular networks to deliver better and cheaper IoT data services.