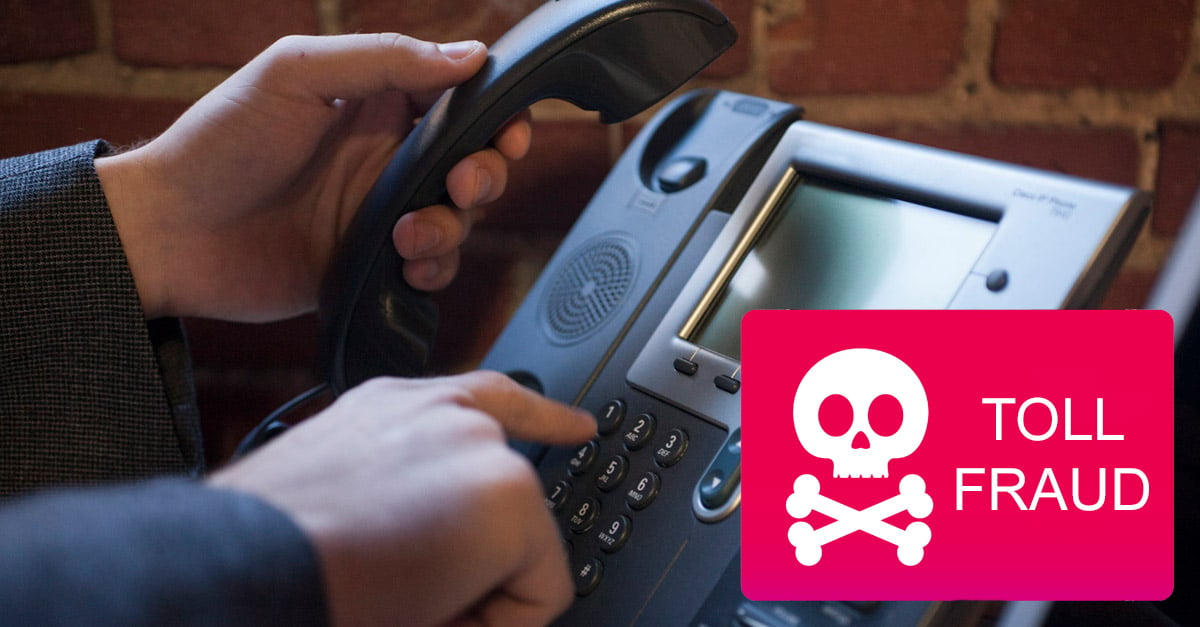 When we think about network security, the telephone network is often overlooked as a target by attackers. One of the most common forms of attack on a telephony network is what is known as toll fraud. The Communications Fraud Control Association (CFCA) reports that in 2019, toll fraud caused US$28.3 billion globally in losses, corresponding to 1.74% of global telecom revenues.1 In this article, we look at how toll fraud affects both conventional telephony and modern VoIP systems, and what you can do to protect your business.

A telephone system is susceptible to many different types of attacks. Toll fraud is a form of attack that involves the unauthorized use of an individual’s or a business’ telephony services and equipment to make long distance, international, or premium-rate number phone calls that are charged to the owner of the targeted system. Toll fraud can take several forms:

Each of the above cases is different, has a varying impact on the targeted company, and must be dealt with in a different way.

Because telephony networks have evolved from conventional to voice-over-IP networks, the methods used by toll fraudsters have also changed.

Toll fraud on traditional PRI circuits that terminate on a conventional PBX usually exploit a bad configuration on the PBX itself. Legacy PBXs have multiple features that are often complex to implement and that allow users to obtain an internal PBX dial tone by dialing a Direct Inward Dial (DID) number. This then gives the user the ability to call this DID, hear the dial tone and then make calls anywhere, which are initiated from the PBX and thus charged to the company. This is a legitimate function, but if it is not secured with a PIN or if it is compromised in some way, such a breach could be leveraged for toll fraud.

Additional methods on previous systems have involved technicians installing devices on PBXs that later allowed them to gain access to the PBX via the PSTN. This access was not only used to make fraudulent calls, but also allowed the PBX to be reconfigured remotely for the purpose of compromising the system. In the past, there were relatively few PBX specialists, which put them in a position where they could exploit their exclusivity to gain malevolent access for a third party.

For the most part, conventional telephony requires some physical access to the PBX, initially at least, in order to further develop a toll fraud strategy.

Because VoIP systems are interconnected with the data network—and ultimately with the internet—they are typically remotely accessible from almost anywhere. Thus, for VoIP, most toll fraud comes in the form of compromised systems by remote attackers, using techniques similiar to those of data hacking. This hacking will normally target the following:

One may imagine that more traditional telephony systems, being disconnected from other networks, are less susceptible to toll fraud than more modern connected VoIP systems. On the contrary, since security for conventional telephone networks has for the most part ceased development, enterprises that still rely on older systems may be more vulnerable than ever before to toll fraud. This is especially true for hybrid systems that use both VoIP and conventional technologies simultaneously.

VoIP systems may intuitively seem more vulnerable, but because the data networks upon which they are based are an extremely mature technology, highly effective security measures have been developed (and continue to be developed), that will keep your VoIP system safe. Thus, the most important step you can take to secure your telephony network from toll fraud is to migrate to a fully VoIP system.

Some of the most important steps you can take to protect yourself from toll fraud include:

Your rights and responsibilities

If you do become a victim of toll fraud, you may find yourself out on a limb. The contracts you sign with most telcos include clauses that exempt them from any liability, especially if it occurs from a lack of precautionary measures on the business’ part.

Be sure to have an open and candid conversation with them about the issue. Talk with your telco and get their advice on the most appropriate measures to protect yourself from toll fraud, and make sure you understand where their responsibility ends and where yours begins when it comes to dealing with toll fraud.

The last thing a business wants is to be surprised by an abnormally high telephone bill at the end of the month. Be sure to avoid such a situation by first understanding what toll fraud is and then by taking the necessary steps to mitigate it.