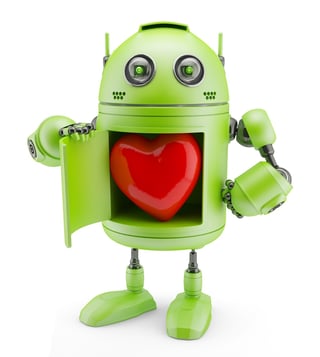 Grandstream and Ubiquiti add excitement to desk phones by leveraging the power of Android OS and a modern interface. By integrating the Android Operating System into the phone, thousands of business productivity applications like Skype, GoToMeeting, Gmail and more can be downloaded onto these phones from the Google Play store.

Advanced apps ranging from Pomodoro Technique Timer to more obvious solutions provided by Google Calendar will make workers in any industry more productive as they perform phone call campaigns and meetings with one device instead of two. The versatility that the Android platform provides is a huge differentiator that separates these phones from a typical IP phone.

Here we look at five SIP endpoints from Grandstream and Ubiquiti that use Android OS. 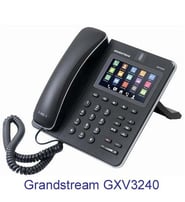 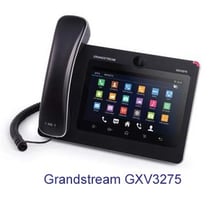 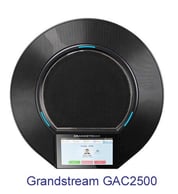 Update: Since this article was written, the GXV3275 has been discontinued and replaced by the GXV3370

Watch the video describing the GXV3240 and GXV3370

The GXV3240 and GXV3275 are feature-rich SIP phones that support high-quality video calling. Both feature a large touch screen interface intended to be used in similar fashion to a tablet. These phones have the unique capability of pairing with 3rd-party IP cameras and SIP-enabled door openers, which can be controlled right from the phone. In addition to supporting the millions of Android apps through the Google Play store, businesses can create their own apps using Google’s API and the Grandstream software development tool kit.

Android apps capable of video calling like Google Hangouts or Skype support the H.264 video codec, allowing users to take advantage of efficient, high-quality video calls. Instead of downloading these applications onto your desktop or tablet and taking the chance on call quality, dialing through these phones allows you to take advantage of higher quality voice codecs on a product that is designed specifically for video calling applications.

Other useful Android apps like Google Calendar or Gmail allow you to create profiles on your phone for your contacts (including uploading and displaying the contact’s picture), allowing for easy dialing right from the apps.

The GAC2500 is Grandstream’s first conference phone. It ditches the old-fashioned plastic dial pad for a responsive touch screen display, providing a more intuitive interface and a smoother way to join internal office members and third parties for a conference call. Two GAC2500s can be daisy chained together and external mics can be added to increase audio pickup and broadcast range. And because the GAC2500 can be used as a conference bridge, this powerful unit is practically a conference system all by itself.

Users of the GAC2500 can download Android apps like Google Hangouts and Skype to hold large conference calls using high-quality hardware purpose-built for conferencing. Instead of dialing out individually to each conference participant, users can add the participants’ phone numbers in advance and automatically dial all participants at the scheduled time. 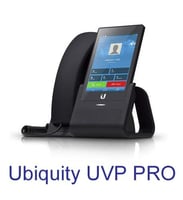 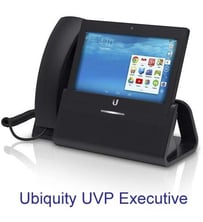 Ubiquity UniFi VoIP phones have a sleek design and an aluminum base, making the phones both sturdy and eye-catching. All UVP phones can be provisioned via TFTP, but the built-in UniFi software makes adding and managing extensions on your phone system a much faster and easier option.

The full range of Android applications can be accessed through the Google Play store, including business productivity apps like Tasker. Tasker can be used to capture incoming or outgoing calls and send them to a web server, allowing the caller to be identified and matched in your customer database or your Google contacts. This allows users of Android phones like Ubiquiti UVP the ability to display the profile of the contact right on the phone, increasing the efficiency of workers by better preparing them when they pick up a call.

The ways that Android OS phones catapult productivity are as numerous as the 2 million-plus apps available on the Google Play store. Android-supported SIP phones are a great solution for any busy executive that wants to take their efficiency to the next level.

UPDATE   Since this article was written, Yealink has launched Android OS-based products, including its T5 series smart media phones and its CP960 IP conference phone.

How VoIP can boost your business productivity

Are you still only using your IP PBX for voice communications?