A WAN connection using wireless technology is among the simplest and fastest ways to connect a business to the internet. However, with so many technologies out there, and so many network design and architectural options to deploy, this simple solution can quickly take on a very complex form.

In this article, we hope to simplify the task of sorting through the various choices, allowing you to take advantage of quick, efficient, and often economical wireless options.

Recently, we’ve talked about a  number of wireless technologies, including 5G, LTE and CBRS, WiMAX, and Wi-Fi. Each of these can be used as a WAN technology to connect a business to the internet. However, for a quick, cheap, and high-speed solution, not all technologies fit the bill. And the reason doesn’t have to do so much with the technology itself, but with the licensing and legal limitations that some of these entail. These aspects can add both complexity and cost to deployments.

To clarify, we’re not talking about WISPs, which connect you directly to the internet. The scenarios we’re focusing on are described in detail below.

This is typically composed of two directional wireless access points installed on the roofs of the buildings involved, creating a wireless link between them. This essentially creates the equivalent of a wired link between the networks of the two buildings.

The result is that the internal networks of the two buildings are integrated into a single network, sharing all available network resources, including internet connectivity. This is the simplest instance of a wireless bridge, and it is called a point-to-point bridge for obvious reasons. 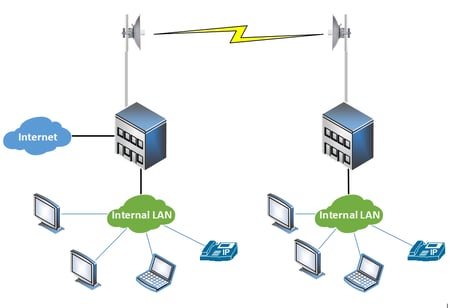 Point-to-multipoint bridging is a setup where there is a single connected building that wirelessly connects multiple buildings like so: 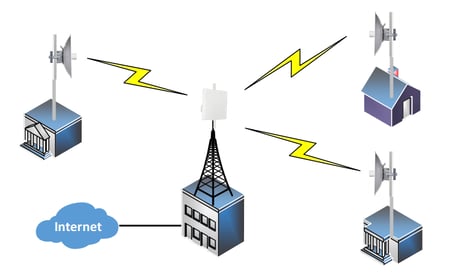 Such scenarios can be expanded further by creating wireless repeaters that interconnect buildings that are further away. They can also be combined with wired connectivity, allowing a whole campus of buildings to not only share a single internet connection, but to also enjoy the use of a single integrated network, where network resources can be freely shared no matter where on campus a user may be. So, all users in all buildings can share a unified internal telephony system, email servers, databases, web services, and any other deployed network service. The following shows an example of such an extended network:

For wireless connections that can cover distances on the order of several miles, the most convenient technology to choose is Wi-Fi. This is because:

To ensure the highest speeds and quality of communication when deploying a Wi-Fi bridge, the following considerations should be addressed:

Keep in mind that the higher frequencies are more susceptible to attenuation due to humidity, fog, rain, and other weather phenomena. For extremely long-distance links over ten miles, the 2.4GHz may be preferable.

With all of the aforementioned benefits of wireless bridging using Wi-Fi, it would seem that it is the ideal solution in all cases. However, there are some limitations that must be considered. These include the following.

Even so, the cost benefits and the simplicity of implementation that wireless offers often outweigh the disadvantages.

Weather and climate – As mentioned above, the speed and quality of a wireless connection is subject to deteriorate due to rain, snow, humidity, or fog. This is also a function of the link distance. A link of 1000 feet will be negligibly affected by weather, while a link of eight miles in bad weather will have a noticeable deterioration in quality and speed.

Wind – Because access points are at the mercy of the wind, they must be extremely well secured. High winds can cause shoddily installed directional antennas to become misaligned, causing network deterioration or complete disconnection.

Wireless repeaters can be unreliable – No matter how well installed, wireless repeaters are often one of the most vulnerable components of a wireless WAN network. They depend upon the alignment of multiple antennas and on the operation of active equipment at each repeater station. This introduces multiple single points of failure. Although they are deployable, they should be used sparingly.

Be mindful of network services – Specific services require specific network capabilities. Wireless links may introduce delay or deteriorated network capabilities during bad weather. This can affect time-sensitive services such as voice and video. Ensure that links are sufficiently stable and have QoS services enabled to deal with such eventualities.

Point-to-multipoint topologies – Such topologies will require a device at the “hub” that will aggregate multiple wireless links. As the number of links to that single device increases, the available bandwidth for each link decreases. In addition, this creates a single point of failure for multiple buildings. Multipoint topologies should be deployed with care to ensure reliability, as well as sufficient throughput.

Consider a redundant network path – For mission-critical services that can make or break a business, it’s a good idea to ensure that you have redundant connectivity to the internet for those particular services in the event of a wireless link failure.

When it comes to choosing the wireless equipment for such interconnections, the considerations that should be examined include:

Directionality – Antennas are designed to focus a wireless signal. The more directional an antenna is, the more focused its signal will be. This, in turn, results in higher throughputs, less interference, and longer distances. Generally speaking, short distance links of less than a mile don’t require very high directionality. As distances get larger, directionality should increase in order to offset the attenuation due to distance and weather phenomena.

For point-to-multipoint deployments, the hub device should have a wider beamwidth to encompass all of the potential points of connectivity, while each individual linked building should have a highly directional antenna.

Power considerations – Since wireless bridges are at the mercy of the elements, it is best practice to use Power over Ethernet (PoE) to deliver power to these devices. PoE uses low voltage AC power, which is much safer in an outdoor environment than the use of high voltage 120V mains power. It is also more convenient, since only a single UTP (unshielded twisted pair) cable is required for both network connectivity and supplying power.

Durability – Depending on the climate, wireless bridges will be subject to varying levels of environmental wear and tear. High and low temperatures, rain, snow, sunlight, and wind can all be damaging to equipment. Durability and longevity of operation should be considered when selecting devices.

By taking into account the various deployment issues, network design considerations, and technological limitations, it is possible to effectively create an easy-to-deploy and economical wireless WAN solution. For a more detailed technological exploration of creating wireless WANs and bridges, take a look at our complete Guide to Wireless Bridging, which will provide insight and help you make the best design and procurement decisions for your particular scenario.